And Ryan Reynolds and wife Blake Lively still looked like they were smitten while out strolling around New York on Tuesday. 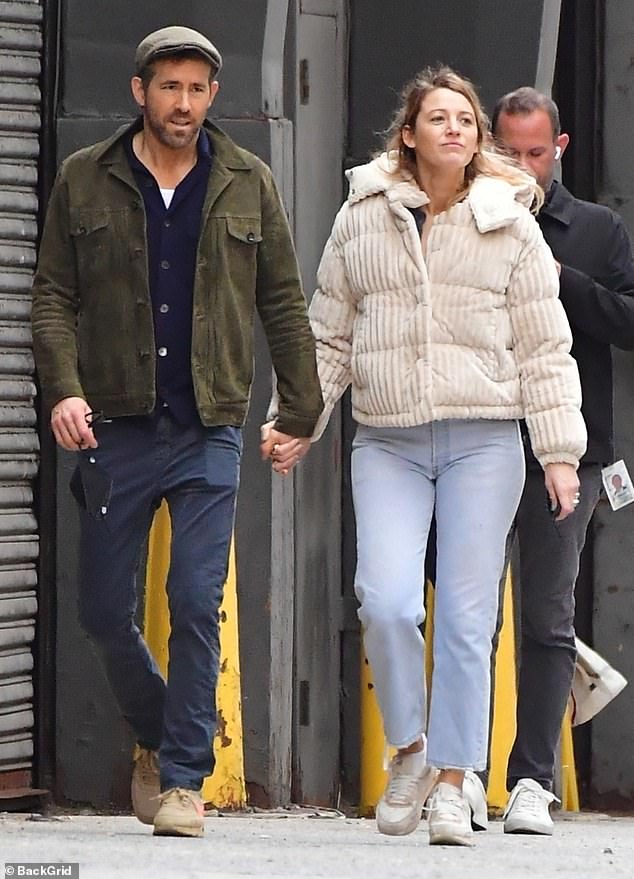 Lovebirds: Ryan Reynolds and wife Blake Lively got to enjoy some solo time during a romantic walk around NYC on Tuesday

Ryan looked laid back during the walk, seen clad in a olive jacket, navy cardigan and dusty blue slacks.

He topped the relaxed look off with a newsboy hat and stubble along his jaw.

Blake held on to the Canadian actor’s arm as they made their way around town.

She was equally as casual while bundled up in a cream bomber jacket with light-washed jeans and white sneakers. 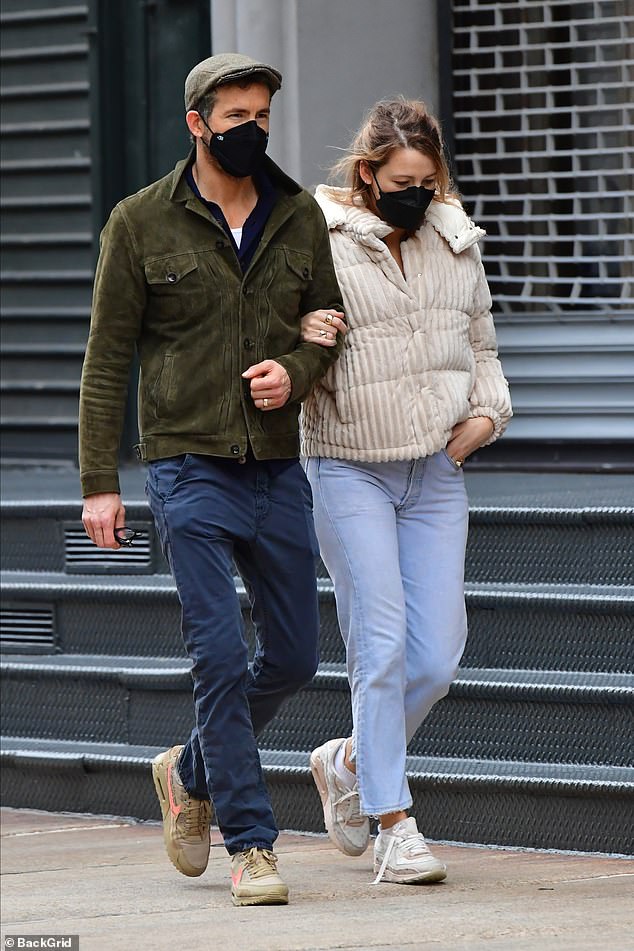 Casual duo: The Canadian actor looked sharp in olive green while Blake was laid back in a cream bomber jacket and light jeans 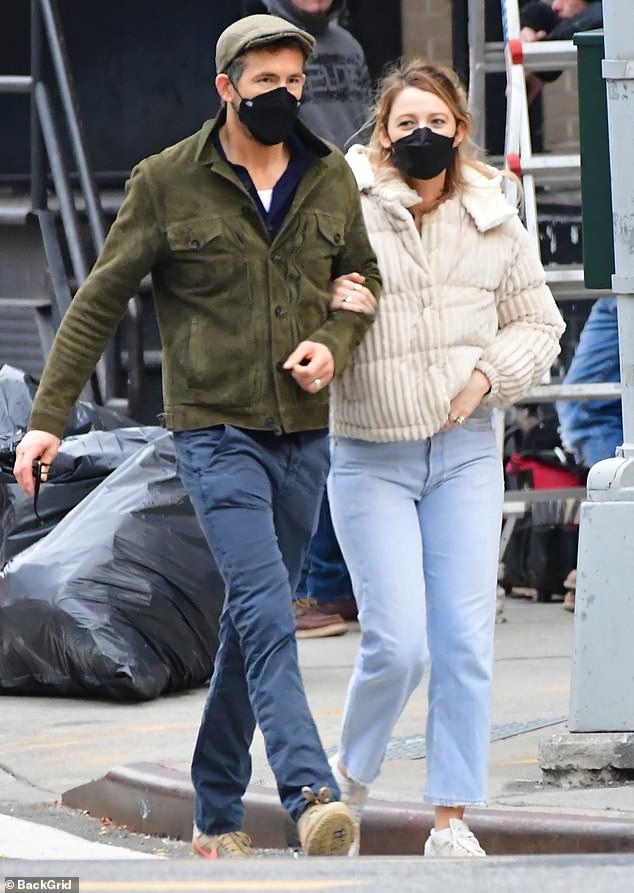 Arm-in-arm: They linked arms and chatted throughout the walk

The pair – who share three kids – slipped out of a building without masks, before putting some on as they emerged into public.

On Halloween this past Sunday, Blake and Ryan were spotted trick-or-treating with their pal Taylor Swift.

The songstress, 31, went incognito wearing a squirrel suit while Blake went for a dramatic costume which made her look like a black and white character à la classic film.

Meanwhile, Reynolds disguised himself with a neon green wig and standard medical mask. 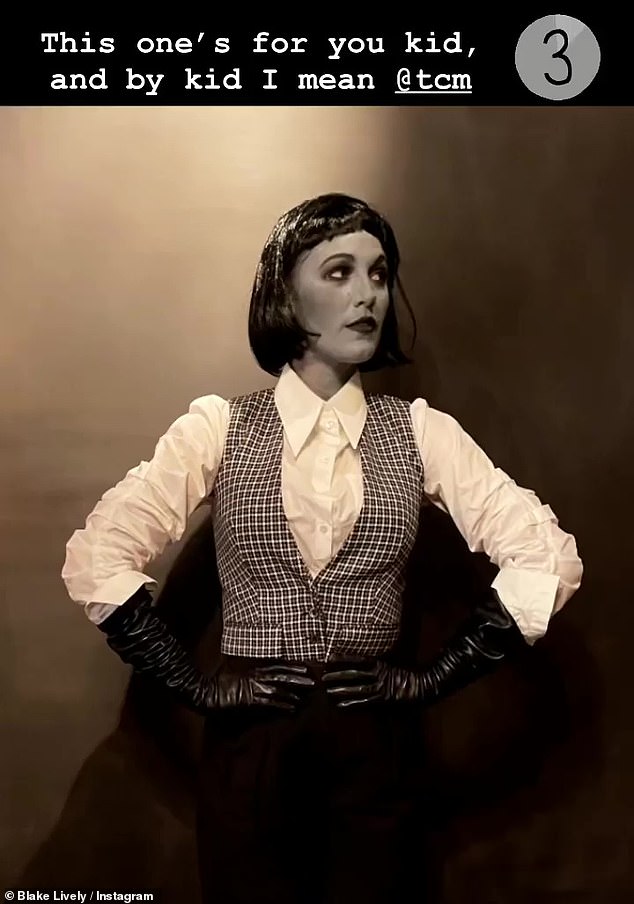 Screen queen: On Sunday Blake went for a dramatic Halloween costume which made her look like a black and white character à la classic film

Blake filled in her fans on the details of the unique ensemble in a series of Instagram posts Monday.

‘I didn’t have a costume,’ she said. ‘But I did have gray face paint, a black wig and a crazy idea. Luckily when I googled it, somebody named @hellosharonfarrell already had the same idea.’

She continued, ‘Thanks for being my first YouTube beauty tutorial. I only had 10 mins and thanks to your awesome instructions I pulled it off. Yes I’m covering my boobs with a wig. Don’t we all? No? No??!’

The Rhythm Section star added a number of shots of the ensemble, posing in one shot in which she wrote, ‘Spamming my makeup because I’m proud;’ in another she wrote, ‘How freaky in real life. It tripped people out.’ 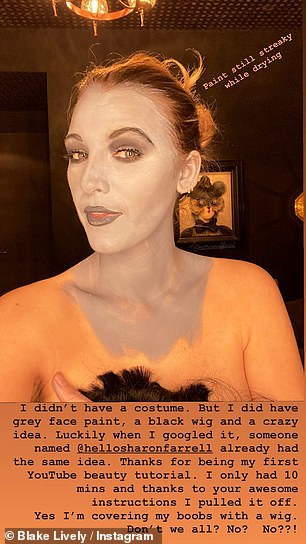 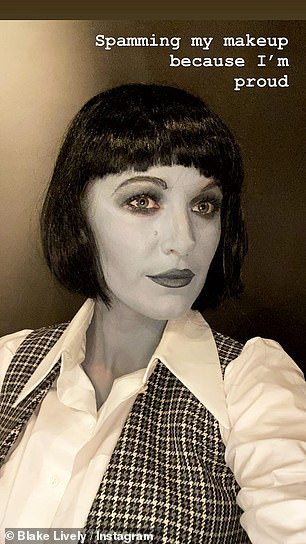