Soapland today is a very different landscape from that of 1960s Coronation Street, the world’s longest-running soap opera. Back then, the cobbles were dominated by the older generation, but increasingly, in Weatherfield, Walford and Emmerdale, young people are playing a much bigger part in major storylines.

Part of that is undoubtedly due to the huge numbers of younger viewers; but also, there seems an unspoken reluctance to deal with issues relating to age. Britain, to me, is more ageist than any other country I have visited; it would seem it’s just not hip to be old.

Corrie’s recent storyline about Audrey feeling on the scrapheap – and being treated by her family as if she were – was especially poignant, and older characters still have all the best lines (Gail accused Audrey of being ‘Weatherfield’s answer to Fagin’), even though the plots are now youngster heavy.

Just because you’re old doesn’t mean you’ve stopped living, and the soaps need to address aspects of ageing as much as they do violent youth, which has become a disturbing trend. Old doesn’t have to mean nursing a sweet sherry for three hours in the pub. 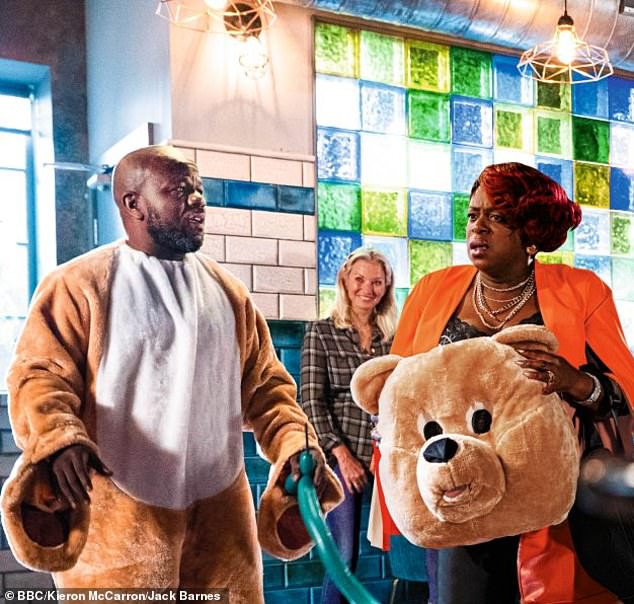 Out comes a fluffy bear in the form of a children’s entertainer, who Kim has been led to believe is her husband, Vincent. It doesn’t quite carry the excitement of the reveal of The Masked Singer (it’s not Vincent), but Kaffy’s amused by it all (pictured)

Who’s been raiding the Comic Relief costume cupboard? In these cash-strapped times, the EastEnders team are clearly making the most of whatever they can find. And so, out comes a fluffy bear in the form of a children’s entertainer, who Kim has been led to believe is her husband, Vincent. It doesn’t quite carry the excitement of the reveal of The Masked Singer (it’s not Vincent), but Kaffy’s amused by it all – mind you, given her disastrous experiences with men, an autopsy would be a bundle of laughs by comparison. With Kim’s curiosity piqued, Phil tells Denise to shut her sister up. Good luck with that. Turning back the tide would be easier.

Janine continues to try to get into her daughter’s good books, but nothing’s rosy where Scarlett’s concerned. Will enlisting Frankie’s help do the trick, or will another altercation with Kat ruin the day yet again? Just throw the two of them into a mud bath and let them fight it out.

Big news of the week is Chelsea’s pregnancy test. If only there were something that could test women’s heads before they get involved with Gray.

CORONATION STREET: LOVE IS NOT THE DRUG 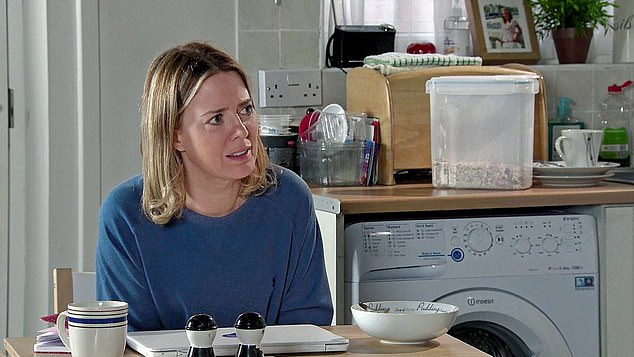 Kevin is thrilled to have an ally, but Nina has suspicions about his fiancée. What is Abi (pictured) really up to?

The wanderer returns, and Abi assures Kevin that the £2k she took was for food and accommodation, not drugs (given the price of British trains, she’d have been lucky to have enough change for a Big Mac en route, let alone a room to eat it in).

Who’s worse at choosing men than that wannabe cruise singer, Whitney in EastEnders? Whit-less, or what?

Refusing to commit to staying around, she’s confronted by a curious Nina, querying why she wants to postpone the wedding. Kevin is thrilled to have an ally, but Nina has suspicions about his fiancée. What is Abi really up to?

There’s a very complicated plot involving Sabeen, Imran, Simon and a mobile phone, the end result of which is Harvey vowing to exact revenge on the Battersby sisters, after Toyah jeopardises his appeal. I have bigger things to worry about. Such as: why is Imran living his life between shoe boxes – the apartment and office? On a Manchester solicitor’s salary he could surely afford a place where he could escape Toyah for half an hour (please! I know I want to). What’s her obsession with asking Imran for lunch and then being peeved when he says he has work to do? It’s called a job, Toyah! You should try it sometime.

Elsewhere, Asha is still chasing Nina, Aadi is still smarting over his dad lavishing more attention on his sister than him, and Natasha rejects Dev. Not a week for love being in the air. Six feet under, more like. 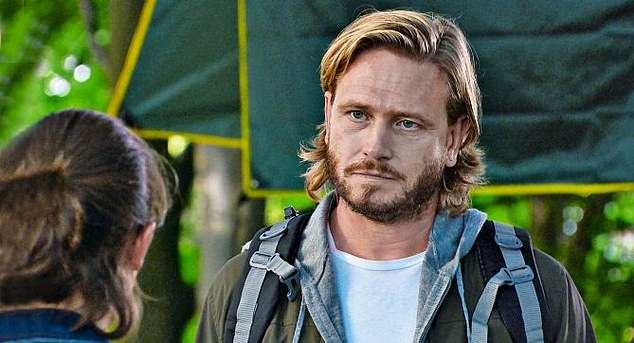 When David (pictured) confesses his love for Victoria – there’s a free jar of chutney in it for you, Vic, of that I am certain – Meena overhears

For a man who sells two jars of chutney a year (and only at Christmas), would-be entrepreneur David is always in huge demand with the ladies. True, he’s good looking and very charming, but in the financial stakes, he’s no Elon Musk. Or Bill Gates. Or Jeff Bezos. But still, Victoria is smitten, as David is with her, little knowing that there’s a serial killer in the wings (isn’t there always?) – his girlfriend Meena (Meena by name, Meaner by nature). When David confesses his love for Victoria – there’s a free jar of chutney in it for you, Vic, of that I am certain – Meena overhears.