Yesterday saw the start of another Brexit-style split in the nation – between Euro 2020 enthusiasts and soap fans. Whenever football disrupts the schedules, you can guarantee soap stalwarts will be up in arms about changes to their favourite shows.

This year, though, the broadcasters are doing all they can to stem the tears that will doubtless be flowing (and not just those from supporters when their hopes are dashed).

On Monday, and subsequent Mondays during the tournament, all episodes of EastEnders, Corrie and Emmerdale for the coming week will be made available to watch on-demand, on BBC iPlayer and ITV Hub respectively. This won’t help anyone with an old Rediffusion TV that barely gets two channels, but will alleviate some of the hysteria.

It also means that, unlike the rest of the country’s pubs, no one in soapland bars will be talking about football results. That’s probably just as well.

When Corrie once wrote in a last-minute storyline involving characters suddenly jetting off to support England, they hadn’t checked the time zones, and the guys would have missed the match. Better to say nothing than risk an own goal. 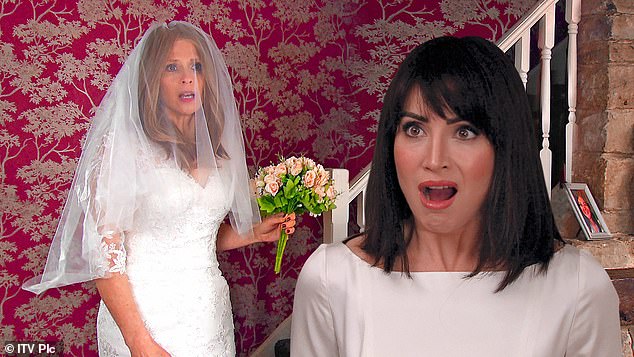 Bernice turns up to her ex’s big day wearing a wedding dress in Emmerdale. Pictured: Bernice (left), with Lyla in her wedding dress

Bernice’s return has introduced some hilarious comedy in her pursuit of Liam, and her feigned attempt at expressing happiness for Leyla and her ex’s forthcoming nuptials disguises a ruthless determination to win him back.

Intent on preventing the wedding, Bernice turns up on the big day wearing a wedding dress of her own, but will her final pleas fall on deaf ears? It’s like a double dose of Bridezilla – with a bit of Norman Bates thrown into the mix.

Let’s hope that whoever is the loser turns all Miss Havisham on us and wears her wedding dress for the rest of her life. They have to make budget cuts somewhere – and heaven knows they’ve made enough with Bernice’s wig.

Apart from the whacking great gap at the front, she couldn’t look more swamped if a yeti had taken up residence on her scalp. Actress Samantha Giles has great hair in real life; it’s a shame they won’t let her wear it.

Just when you thought Vic’s life was back on track, it turns out Luke has been leading a double life (is there any other kind in this village? Having just one makes you look like a real freak.) There’ll be tears. Again. 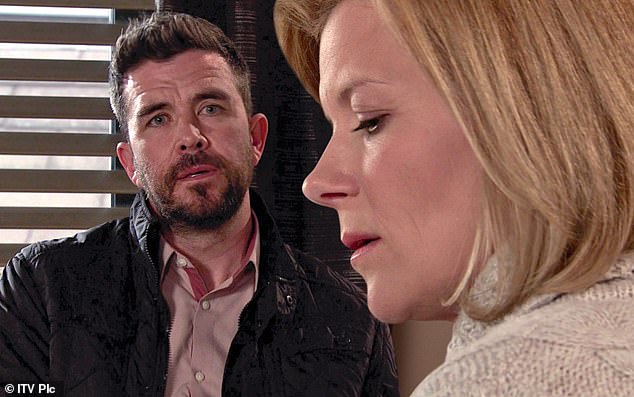 How many more beards can one show take? Small wonder that Alina went for Tyrone; he was the only man she could reach without having to do a topiary course first.

The latest beardie, DS Glynn, visits Leanne to impress upon her the importance of nailing Harvey. Personally, I doubt Harvey could shift a crate of Coke, let alone the white powder, and why he chose to do it on the Weatherfield cobbles remains a mystery.

Look out for those booze bottles on Leanne’s kitchen unit; come on, Leanne, not even tempted, with everything going on? Maybe DS Glynn will smuggle a bottle out under his beard.

Or perhaps Nina could steal them; she’s hitting the bottle big time. When she tries to steal more vodka from the shop, Carla spots her and warns that alcohol will solve nothing. Well, no, it is never a solution, but would Peter have got through being with Carla if he’d been sober?

Alcohol rears its more pleasant head at Curtis’s cocktail evening at the Bistro. The only fly in the ointment for Fiz is when Alina arrives, dressed to the nines, followed by Tyrone in skinny jeans.

Tyrone’s attempts to keep up with Alina’s youth are the only funny thing emerging from this absurd storyline.

EASTENDERS: STAND BY YOUR WOMAN 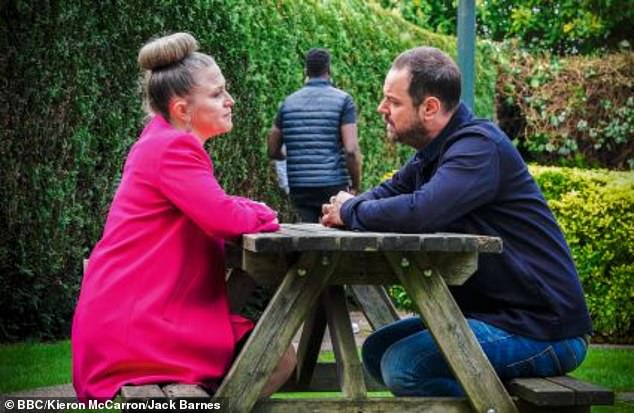 Mick and Linda have had so many heart-to-hearts, they’re like organ donors on acid. They’re still struggling with Linda carrying Max’s baby, though Mick insists he’ll love it no matter what. Of course he will.

He’s not going to be happy unless his ever-expanding family has enough people to make a football team – both sides.

Linda’s low spirits haven’t prevented her from diving into the Quality Street tin for fashion inspiration again. Having exhausted The Big Purple One, she’s now alighted upon Pink Fudge. It’s only a matter of time before Green Triangle makes an appearance.