A brand new guide by the AA has named the best restaurants in the British Isles.

The Restaurant Guide 2022 delves into each of the restaurants that have been awarded prestigious rosettes by AA inspectors. It’s essential reading for gourmands, and it’s long-awaited – for the first time in 50 years, the AA released no guide in 2020.

The 28th edition of the guide showcases 1,700 eateries, including 100 new entries, each handpicked for their ‘culinary excellence’. Here are a few of the mouthwatering restaurants that made the cut… 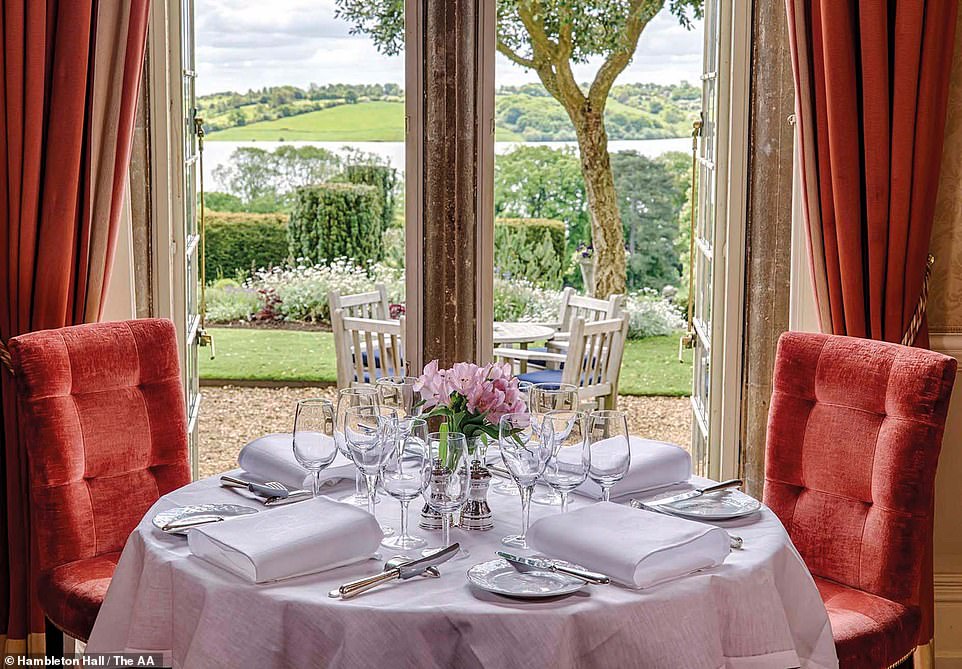 Aaron Patterson has been the head chef at four-rosette Hambleton Hall, pictured above, since 1992

Aaron Patterson has been the head chef at the four-rosette establishment since 1992, curating dishes with a ‘focus on the very best local produce’.

‘Patterson’s cooking is often understated and deceptively simple, with flavours allowed to speak for themselves,’ the guide says, with the likes of ‘terrine of heritage carrot’ or ‘lasagne of girolle mushrooms with Iberico ham and grappa sauce’ making an appearance on the menu. The ‘extensive’ wine list, meanwhile, offers ‘a very good choice by the glass’. 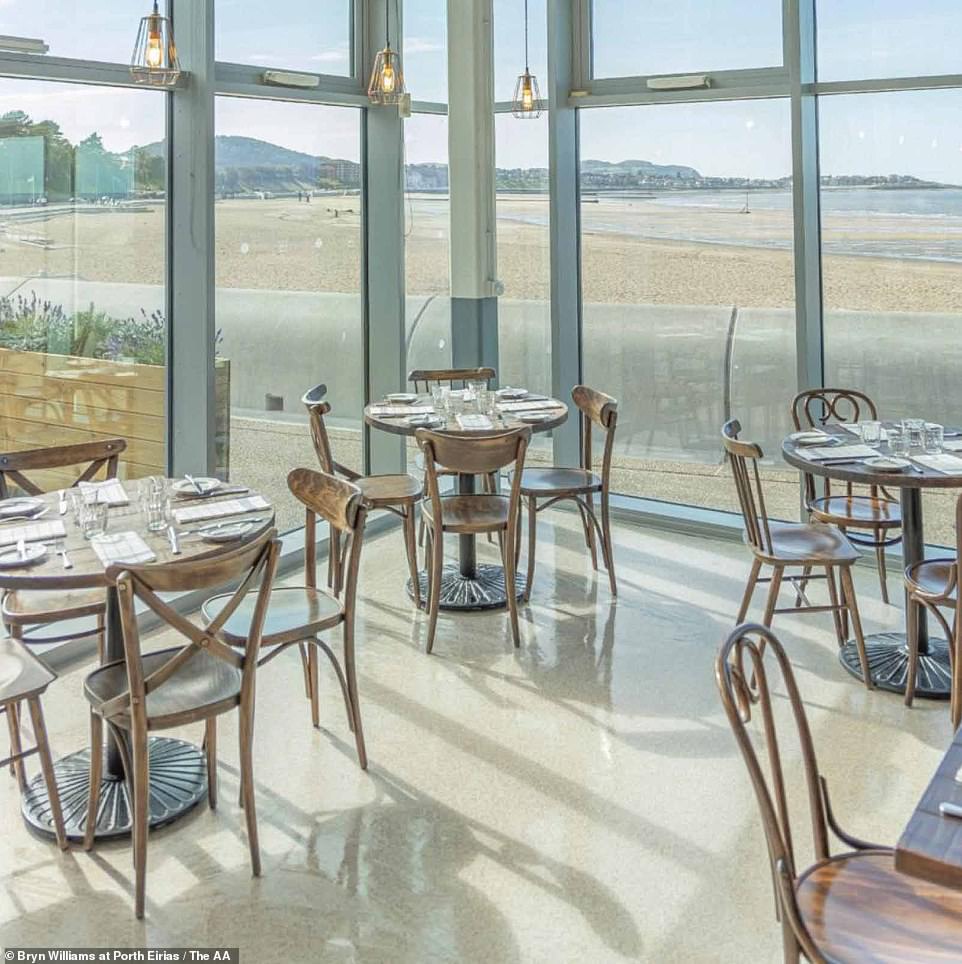 Inside, ‘exposed steelwork, pendant lights and industrial-chic create the feeling of a hip, big-city eatery’.

The AA says: ‘Bryn Williams made his name alongside celebrated chefs and has been chef-patron of Odette’s in London’s Primrose Hill since 2008, so you can expect sharp, modern British bistro ideas.’

Paul Ainsworth at No 6, Padstow, Cornwall 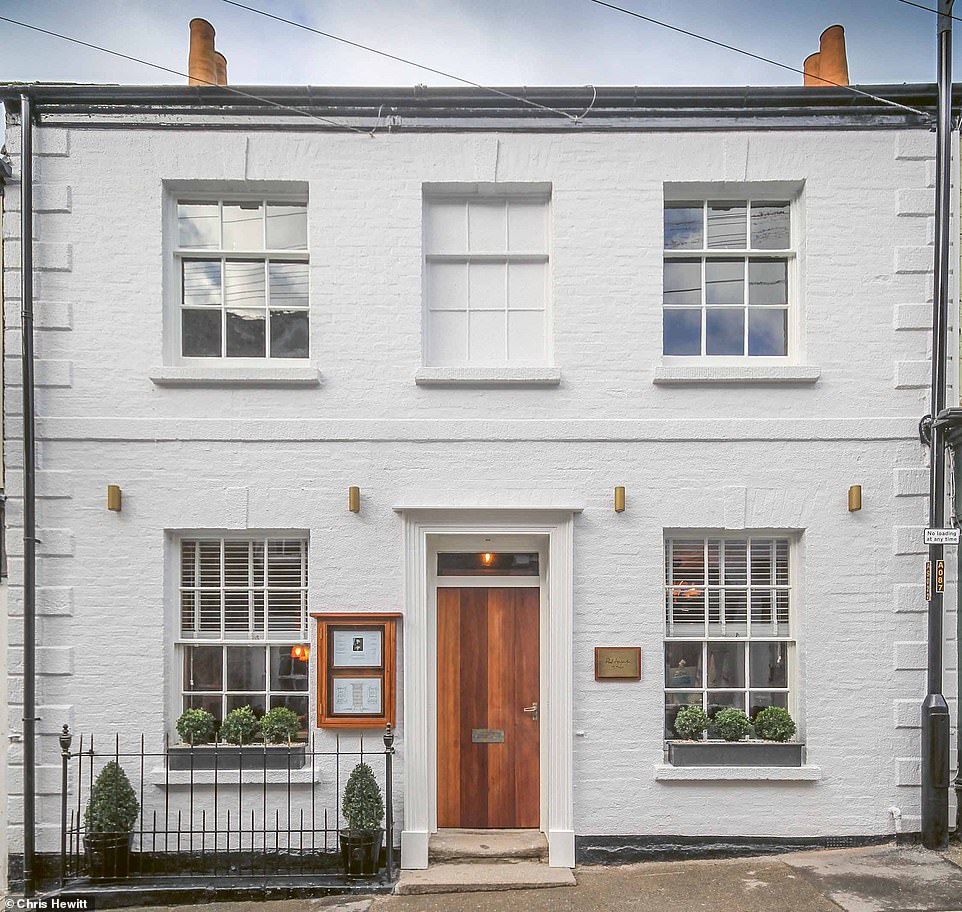 Paul Ainsworth at No 6, which is set inside a Georgian townhouse in Padstow, boasts four rosettes

Four-rosette restaurant Paul Ainsworth at No 6, which opened its doors in 2005, is housed in a Georgian townhouse in Padstow, with ‘the period charm of the spaces intact and bold artworks peppering the walls’.

According to the AA, Ainsworth’s cooking, which is interpreted at the restaurant by chef Chris McClurg, ‘has always tended towards the creatively sharp end of the modern British spectrum, with technical pizzazz galore and eye-catching presentation’.

What can diners expect from the menu? The AA reveals: ‘Prime materials of the finest and freshest to be found in Cornwall’s seasonal larder are helped along by global goodies in dishes that deliver muscular layers of flavour and texture.’ 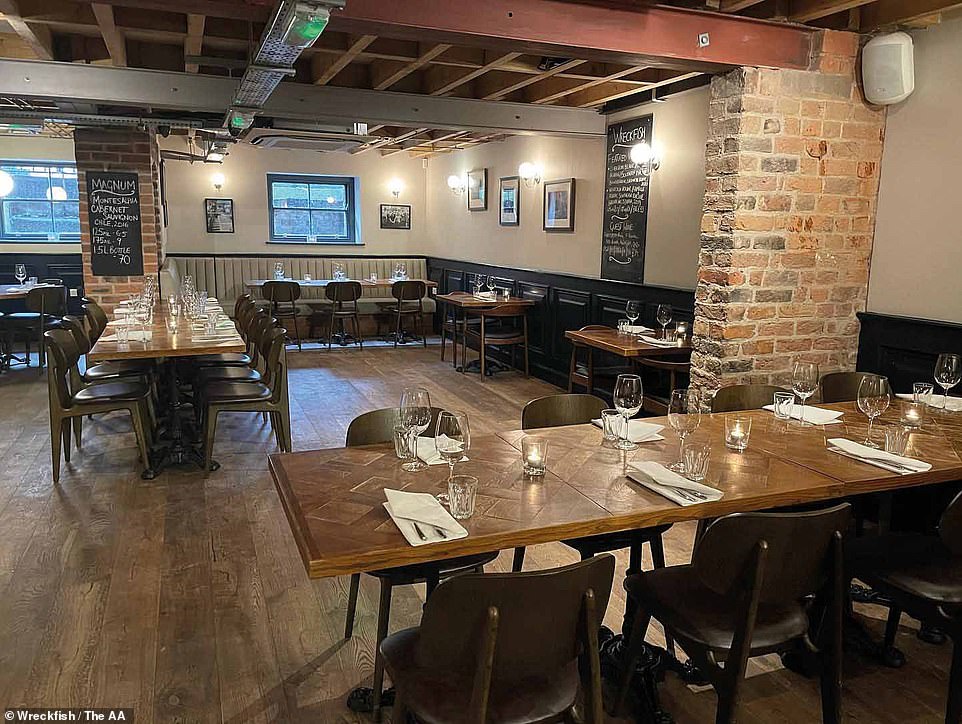 Wreckfish, pictured, has wooden floors and tables, and ‘exposed brickwork gives it a stripped-back industrial feel’

Wreckfish is run by chef Gary Usher, who used crowdfunding to get the new restaurant off the ground, the AA explains.

The restaurant, which has one rosette, occupies a ‘former derelict Georgian building in the cool Ropewalks district’ and has wooden floors and tables and exposed brickwork that gives it ‘a stripped-back industrial feel’. 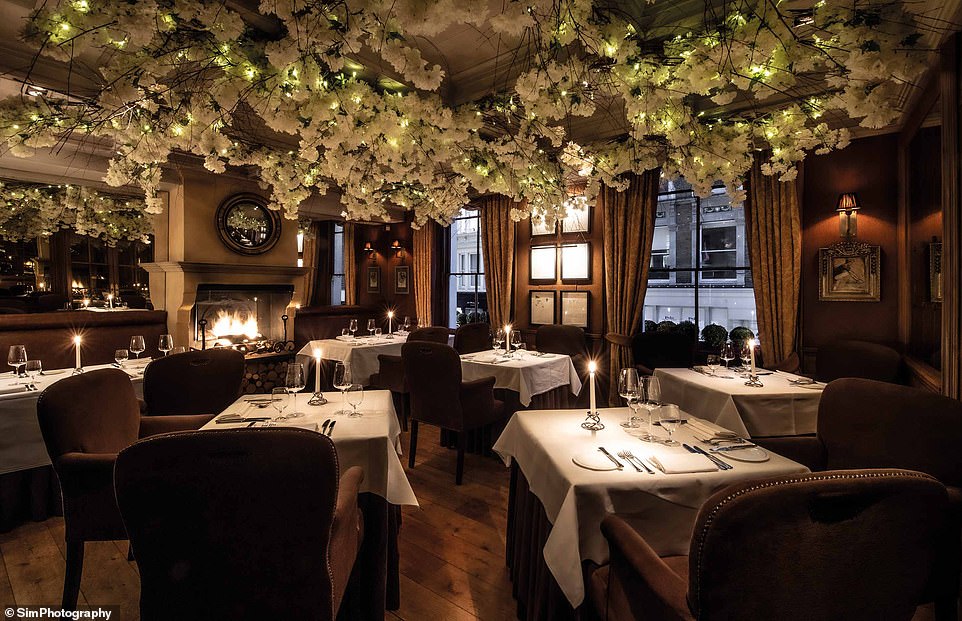 According to the AA, ‘the setting may be soft focus, but there’s nothing whimsical about the cooking’ at Clos Maggiore (pictured)

‘If you’re looking for a romantic spot, then it’s hard to beat Clos Maggiore.’ So declares the AA of the three-rosette eatery, which has ‘dried foliage adorning the walls and the ceilings’ and ‘plush and upmarket’ decor.

As for the food, the AA says ‘the setting may be soft focus, but there’s nothing whimsical about the cooking’. 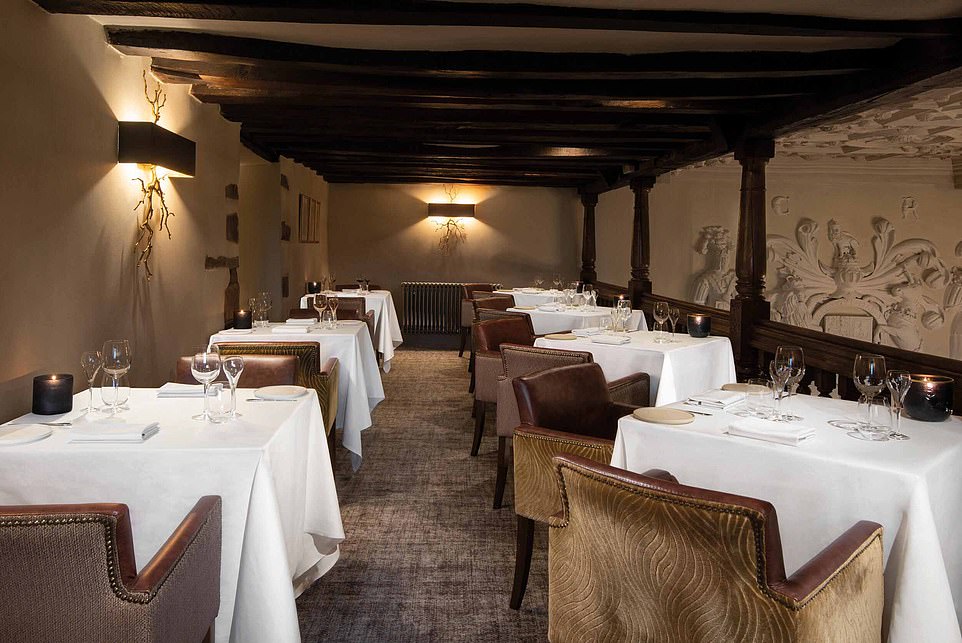 Acleaf, pictured above, is housed in the ‘fabulously historic Tudor mansion’ of Boringdon Hall

Acleaf, which has three rosettes, is located in the ‘fabulously historic Tudor mansion’ of Boringdon Hall – a ‘splendidly luxurious setting for inventively stylish British cooking’.

‘It really does offer a tangible sense of the past, with age-darkened beams and a plethora of period features,’ the AA says.

According to the guide, head chef Scott Paton creates ‘seasonally led menus’ that ‘showcase his stylishly inventive British cuisine’, featuring dishes like ‘precisely cut duck terrine with quince’ or a plate of turbot and mussels with ‘bags of flavour’.

Patrons can look forward to ‘the very best in contemporary British cuisine’ at Hrishi, according to the AA. Pictured is one of the restaurant’s ‘cutting edge’ dishes

The head chef at the four-rosette Hrishi at Gilpin Hotel & Lake House is Hrishikesh Desai, and the AA is incredibly impressed with his work. The guide says that the restaurant offers ‘the very best in contemporary British cuisine, subtly influenced by Desai’s Asian heritage’.

‘There’s a real sense that this is exciting, cutting-edge cooking,’ it adds.

According to the AA, the Gilpin Hotel & Lake House is a ‘fabulously chic and luxurious bolthole’ located in ’21 acres of woodland gardens’ with an ‘air of sophisticated tranquillity’. 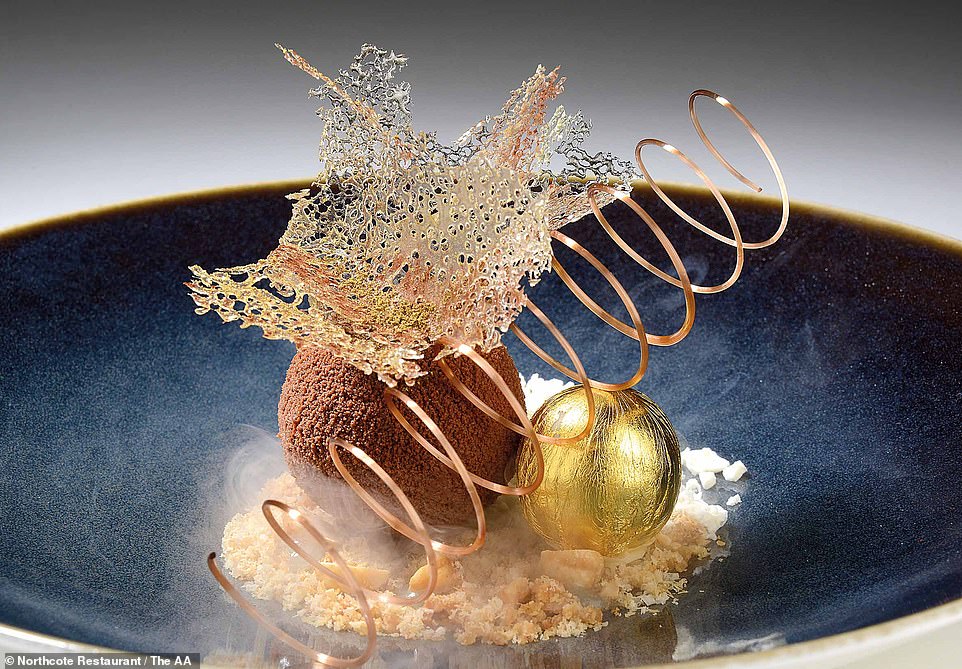 Northcote Restaurant is a ‘long-established Northern gem’ in a Victorian manor in the Ribble Valley, with ‘fabulous views of the Forest of Bowland from the terrace’.

With chef Lisa Goodwin-Allen at the helm, the four-rosette restaurant is ‘justly famous as one of the best places to eat in the North’, the AA reveals.

The guide says Goodwin-Allen ‘oversees a kitchen that takes its inspiration from the best of local ingredients, including some from Northcote’s own kitchen garden’. It adds that her ‘years of experience and technical know-how are clear to see in technical interpretations of classic dishes with a definite Lancashire accent’. 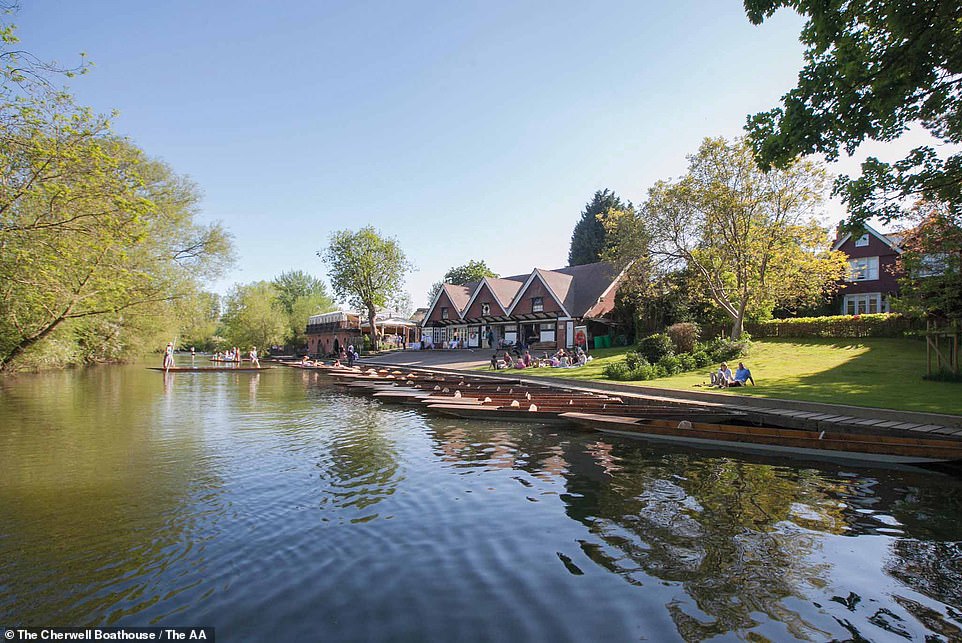 WHAT THE AA ROSETTES MEAN… 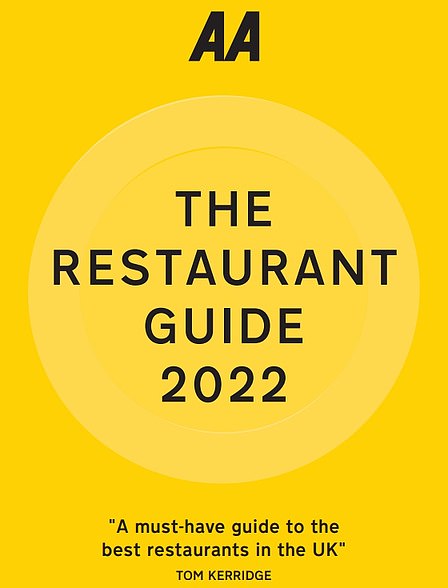 The AA’s restaurant guide is now in its 28th edition

One Rosette – These restaurants will be achieving standards that stand out in their local area featuring food prepared with care and good quality ingredients.

Two Rosettes – The best local restaurants, which aim for and achieve higher standards, better consistency, greater precision in cooking and obvious attention to the selection of quality ingredients.

Three Rosettes – These are outstanding restaurants that achieve standards that demand national recognition well beyond their local area.

The cooking will be underpinned by the selection of the highest quality ingredients, the timing, seasoning and judgement of the flavour combinations. This will be supported by intuitive service and a well-chosen wine list.

Four Rosettes – Among the top restaurants in the UK where the cooking demands national recognition. These restaurants will have intense ambition, a passion for excellence, superb technical skills and remarkable consistency.

Five Rosettes – The pinnacle, where the cooking compares with the best in the world.

These restaurants will have highly individual voices, exhibit breathtaking culinary skills and set the standards to which others aspire, yet few achieve.

The Cherwell Boathouse in Oxford is a Victorian boathouse restaurant with one rosette, which the AA describes as ‘one of the city’s cherished institutions’.

Patrons will see ‘swans and punts paddling by on the River Cherwell’ as they dine, though ‘waterside tables are at a premium on fine days’.

The guide says: ‘Inside, the ambience is cosy and humming with the chatter of happy diners tucking in to a menu of inventive, modern British ideas.’ 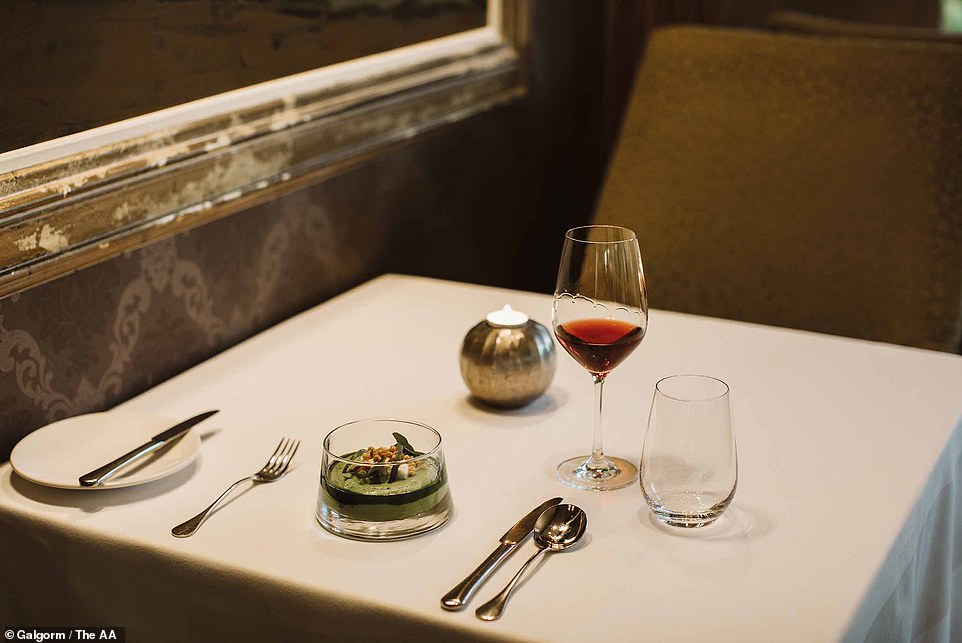 ‘Flavours are clear and carefully considered and dishes are precisely constructed’ at Galgorm, the AA guide reveals

The River Room Restaurant is the fine-dining restaurant in the ‘luxurious’ Galgorm country resort, which boasts three rosettes and ‘overlooks a stretch of the River Maine’.

According to the AA, the restaurant’s ‘flavours are clear and carefully considered and dishes are precisely constructed with all the attention to detail one expects at this level’.

The guide recommends starting with the ‘excellent homemade bread’, followed by ’35-day aged beef with lardo, mushroom and black truffle’, and rounding things off with a caramelised pineapple dessert – and ‘excellent Irish artisan cheeses, should you be so inclined’. 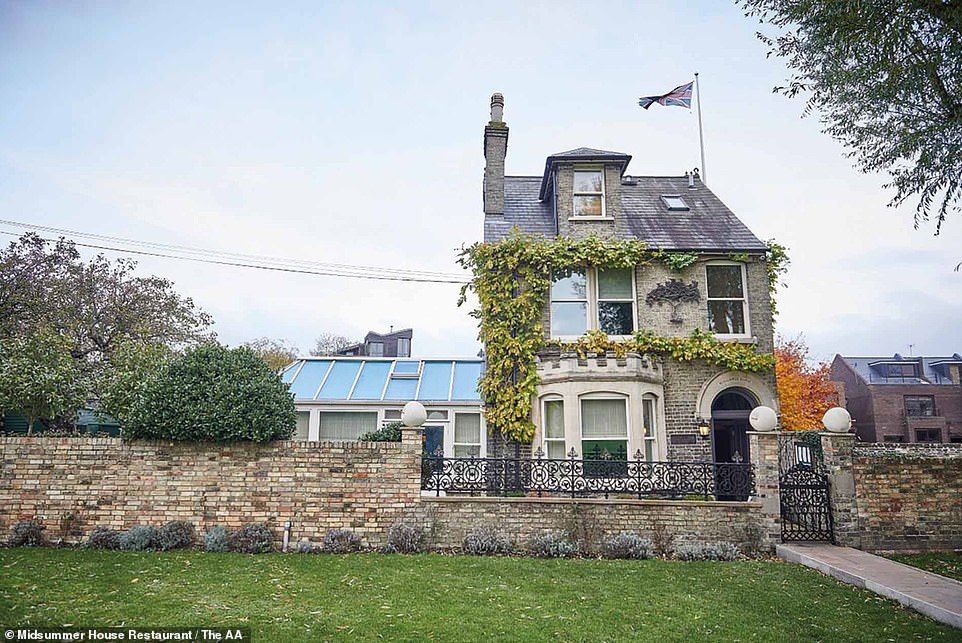 The AA is full of praise for Midsummer House Restaurant, pictured, describing it as a ‘world-class dining restaurant’

With an impressive five rosettes to its name, it’s no surprise the AA describes Midsummer House Restaurant, which is set in a Victorian villa on the banks of the River Cam, as a ‘world-class dining restaurant’.

The kitchen and dining area are divided by a window, the AA reveals, through which patrons can watch chefs Daniel Clifford and Mark Abbott create ‘elegant, precise and inventive modern British dishes’.

The guide notes: ‘The concise menu descriptions are at odds with the intricacy of the food – each carefully sourced ingredient is treated with respect and is on the plate for a reason.’ 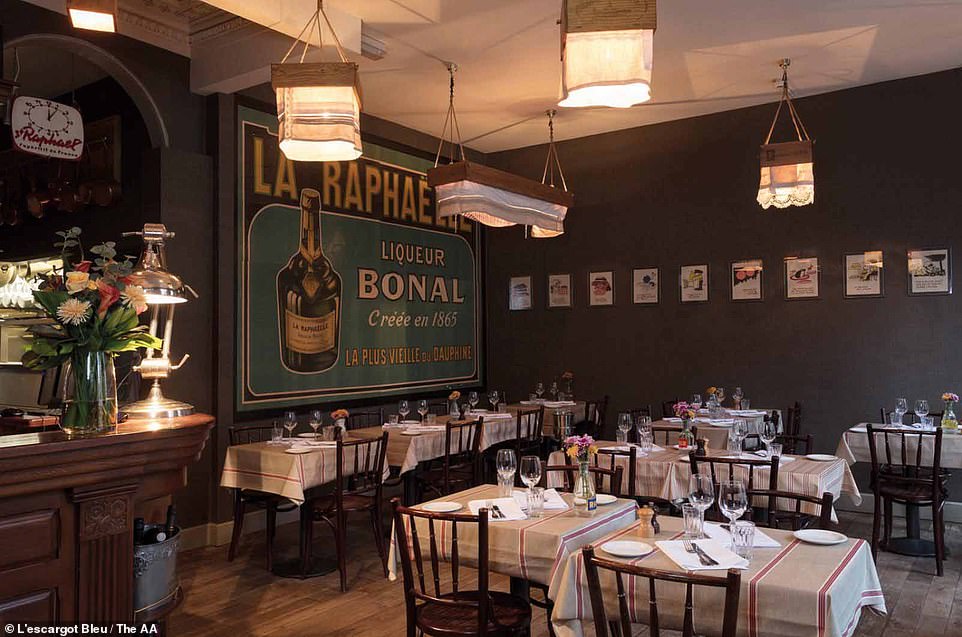 The snails at ‘L’Escargot Bleu, pictured, ‘come from Barra in the Outer Hebrides, and there’s a Scottish flavour’

‘L’Escargot Bleu is indeed blue – on the outside at least, and snails are present and correct among les entrees,’ the AA says of the French-Scottish restaurant, which has one rosette.

According to the guide, the menu is bilingual, and offers a range of ‘classic bistro dishes’.

Despite the French influence, the AA reveals that the snails on the menu ‘come from Barra in the Outer Hebrides, and there’s a Scottish flavour’. 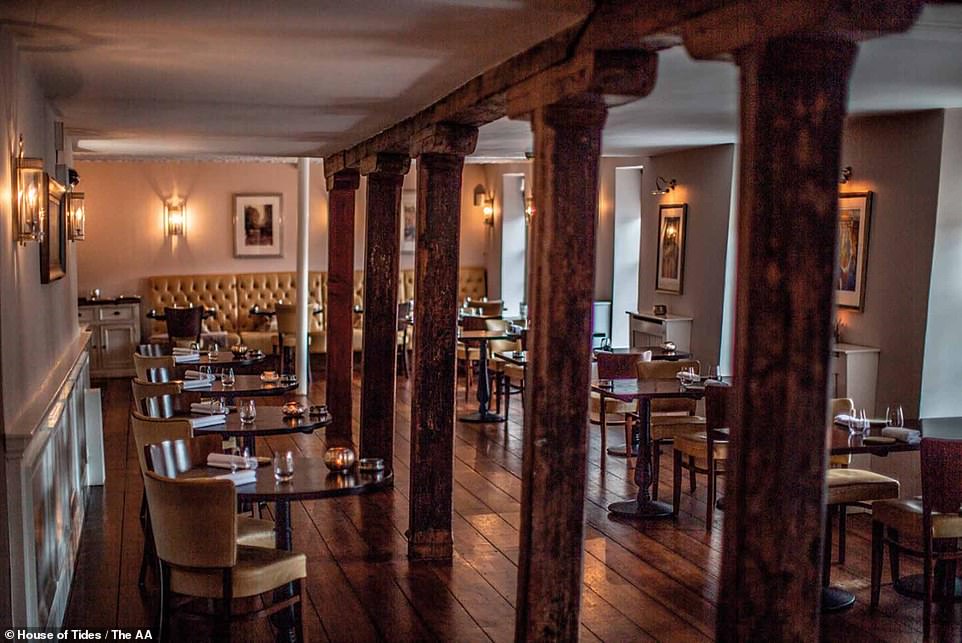 ‘Local culinary hero’ Kenny Atkinson is in charge of Newcastle’s House of Tides, a Grade-1 listed 16th-century townhouse ‘in the shadow of the iconic Tyne Bridge’ that has earned four rosettes.

According to the AA, guests sip on cocktails in the downstairs bar before heading to the ‘refined beamed dining room’ for the ‘main event’ – Atkinson’s tasting menu, which brings ‘top-flight modern cooking to Newcastle’s bustling quayside’.

The guide reveals: ‘Although produce from the North East is the cornerstone of the modern British menus, the kitchen isn’t afraid to look globally for inspiration, as in a fragrant canape of tomato and cumin gougere. Everything that appears from the kitchen is top-drawer.’ 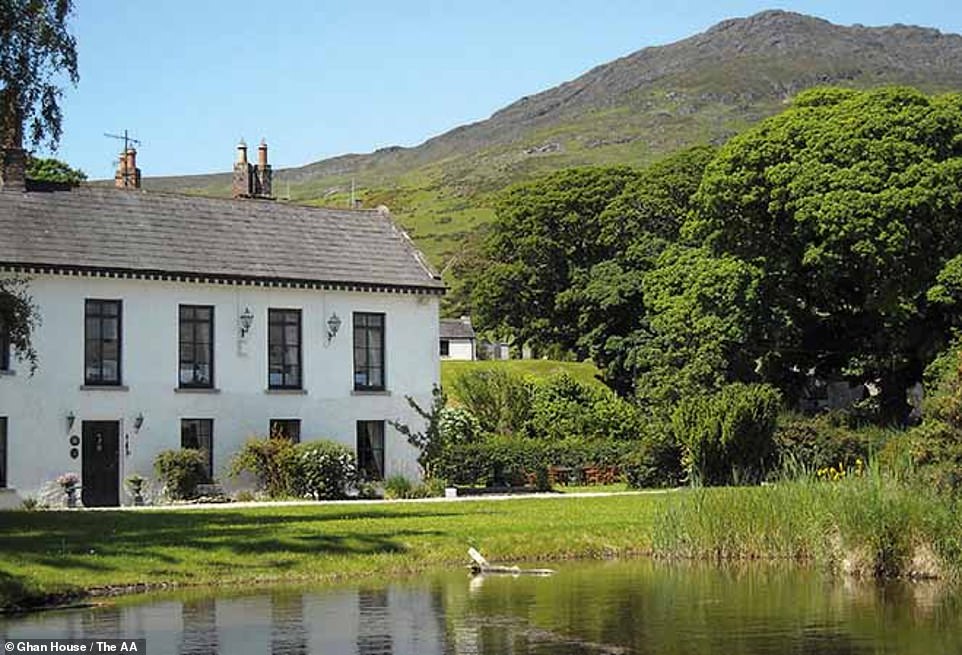 The cuisine at Ghan House, pictured, ‘has a French base, but offers plenty of interesting combinations’, according to the AA

Ghan House is ‘set on the shores of Carlingford Lough, just before it reaches the sea’ – and the restaurant makes good use of seafood from the lough, according to the AA.

The guide reveals that the two-rosette eatery, which is based in a Georgian townhouse with a walled garden and a pond, has ‘a high ceiling, gilded plasterwork and a baby grand piano’.

‘Cuisine has a French base, but offers plenty of interesting combinations,’ the AA adds. 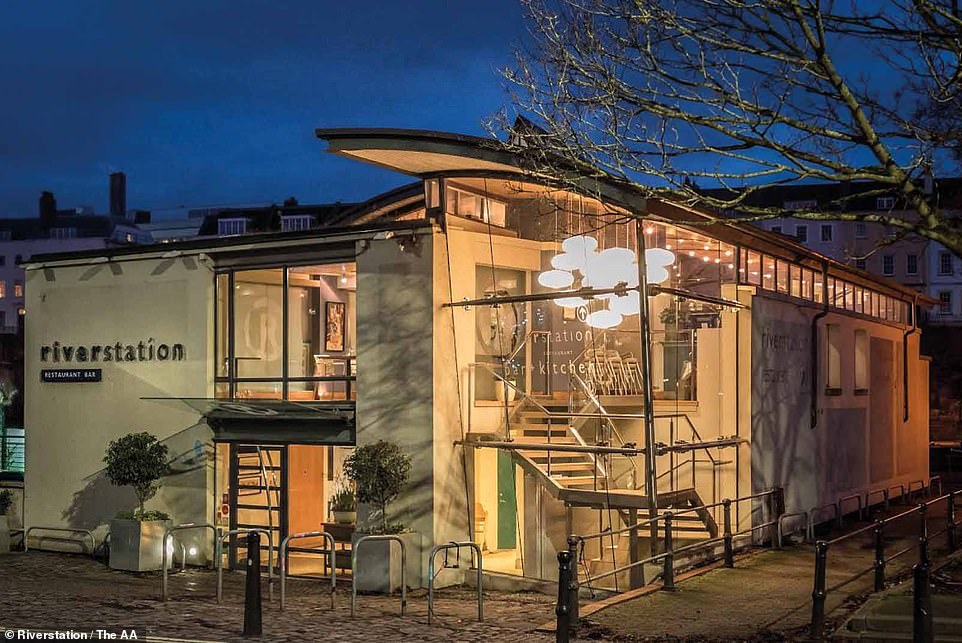 Guests can arrive at Riverstation by boat, according to the AA. The one-rosette restaurant is set on the River Avon

‘Being on the River Avon as it flows through the city’s docks, the views from Riverstation’s terrace and balcony are outstanding,’ says the AA.

Guests can even arrive at the one-rosette restaurant by boat, according to the AA, which instructs: ‘Just ask your ferryman to dock at the restaurant’s own pontoon.’

Riverstation’s ‘seasonally changing menu’ is filled with ‘fresh and inspiring modern British and European dishes’, while patrons in the downstairs bar can indulge in ‘brunches, English classics and small plates’.