The COP26 climate summit is entering its eighth day. Prime Minister Boris Johnson has urged countries to make “bold compromises” as talks between world leaders on how to curb human-induced climate change enter their final week. One of the main goals is to limit global temperature rises to 1.5 C — the figure widely agreed on that is the limit to irreversible environmental damage.

Last Friday, the UK Presidency at the summit marked “Ocean Action Day”, championing a call for action to protect and restore ocean health and resilience.

In recent years, Downing Street has opened itself up to a variety of environmentalist groups, taking onboard their concerns and advice on how best to tackle environmental degradation.

A large chunk of this has surrounded fishing, and the extent to which vessels operating in UK waters may be damaging ocean life beyond repair.

Greenpeace is one organisation that has been at the forefront of attempting to influence Westminster. 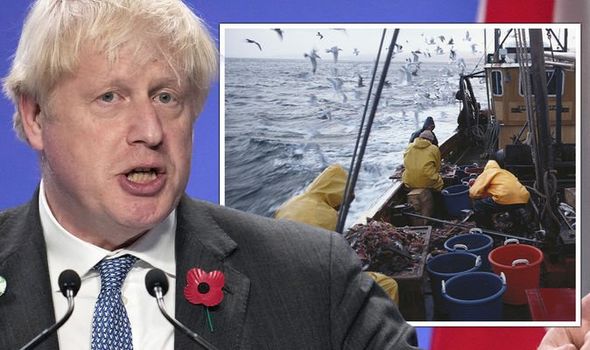 UK fishing: The PM was urged not to cave in to the ‘eco-warrior narrative’ surrounding fishing (Image: GETTY)

The group investigates, documents and exposes the causes of environmental destruction and lobbies the Government, also using consumer pressure and mobilising members of the general public.

They recently urged the UK to ban supertrawlers from sweeping the seafloor of wildlife, with No 10 having pledged to do exactly that earlier this year.

Many, however, remain sceptical of the methods involved, and claim that the “eco-warrior narrative” may do more harm than good.

Barrie Deas, Chief executive of the National Federation of Fishermen’s Organisations (NFFO), said he was “worried” about the future of fishing should the Government continue to “pick up much of this narrative”.

He told Express.co.uk: “Especially at the top of the governing party I think there are eco-warrior ways of thinking.

“Even within Defra, there are some people that give far too much credence to Greenpeace rhetoric and not enough to the evidence.

“And that’s a real worry for us at the moment.”

Fishing vessels: UK fishing has been at the forefront of politics since the Brexit deal was revealed (Image: GETTY)

He claims fishing stocks the world over have significantly recovered in recent decades.

According to a report published by the PNAS (Proceedings of the National Academy of Sciences of the United States of America) in 2020, roughly 50 percent of the world’s oceans’ fish stocks are recovering or have already recovered.

This was, the paper said, largely down to shifts towards sustainable fishing.

Green groups claim the replenishing is also down to the introduction of marine protected areas (MPA) — swathes of ocean either permanently or temporarily protected against fishing.

Nearly a quarter of the UK’s territorial waters are covered by MPAs, symbolising the Government’s “world-leading” target to protect 30 percent of ocean biodiversity by 2030.

While the practice has been largely successful, Mr Deas warned that it could see vessels entering territory not previously fished.

Fishing news: Fleet numbers were significantly cut at the turn of the century (Image: GETTY)

He said: “There are worries about what we call the spatial squeeze, this massive expansion of marine protected areas, 38 percent of UK waters, and this question mark over whether fishing will be allowed in those and the displacement effect that comes with it.

“I don’t think the Government has given sufficient thought to what happens when you displace fishing from its customary areas.

“In the early 2000s, there was a very large cod area in the northern North Sea closed for cod protection.

“It was only a three-month closure but what you found was that the Dutch trawlers had been displaced from where they usually fished on to pristine areas that they’d never fished before.

“That’s where you get the ecological damage when it’s the first trawl.

“And the Scottish fleet had been displaced in haddock grounds and there was a massacre with enormous discards — if you ban not only supertrawlers but everything, then you have a massive displacement problem.”

However, research suggests these protected areas are exceedingly difficult to police.

According to 2020 data from Global Fishing Watch (GFW), by Oceana, a conservation NGO, more than 97 percent of British marine protected areas are being dreaded and bottom trawler.

Supertrawlers: The huge vessels blanket the seafloor in a net that captures all the fish in the area (Image: GETTY)

It suggested that bottom trawling and dredging — what are described as the most destructive type of fishing on seafloor habitats — is happening in 71 out of 73 offshore MPAs around the UK.

The vessels, from the UK, other EU countries and Russia, spent an estimated 200,000 hours trawling or dredging across the seabed in offshore MPAs in 2019, according to GFW algorithms based on their AIS (automatic identification systems) data.