The relationship between Vice President Kamala Harris, 57, and President Joe Biden, 78, has reached an “exhaustive stalemate”, according to a tell-all piece published by an American news network. CNN spoke to some three dozen former and current Harris aides, administration officials, Democratic operatives, donors and outside advisers about the tensions running rife between Biden’s team and those accompanying his 2020 running-mate.

One insider told CNN: “They’re consistently sending her out there on losing issues in the wrong situations for her skill set.”

Lieutenant General of California and long-time friend of the Vice President Eleni Kounalakis, 55, added: “It is natural that those of us who know her know how much more helpful she can be than she is currently being asked to be.

“That’s where the frustration is coming from.” 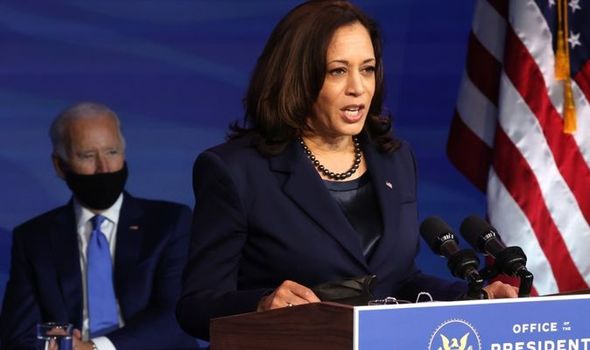 A party donor went on to say: “Kamala Harris is a leader but is not being put in positions to lead.

“You should be putting her in positions to succeed, as opposed to putting weights on her.

“If you did give her the ability to step up and help her lead, it would strengthen you and strengthen the party.”

The former California Senator has been tasked with holding off migration from Central America into the United States, a job CNN reports the Vice President did not want to take on.

However, those around the 46th President claim issues with Harris are of her own doing and pointed to her awkward interview with NBC’s Lester Holt as evidence of that.

White House Press Secretary Jen Psaki, 42, has since responded to rumours of a rift in the West Wing.

READ MORE: Macron hits out after Britons made it clear ‘they don’t need France’

She wrote on Twitter: “For anyone who needs to hear it.

“@VP is not only a vital partner to @POTUS but a bold leader who has taken on key, important challenges facing the country—from voting rights to addressing root causes of migration to expanding broadband.”

She told CNN: “It is unfortunate that after a productive trip to France in which we reaffirmed our relationship with America’s oldest ally and demonstrated US leadership on the world stage, and following passage of a historic, bipartisan infrastructure bill that will create jobs and strengthen our communities, some in the media are focused on gossip – not on the results that the President and the Vice President have delivered.”

Little over a year ago, the Biden-Harris ticket made history by receiving more votes than any other in the 2020 US Presidential Election – 81million to Trump and Pence’s 74million.

However, in 12 months, support for the pair has waned.

Vice President Harris had approval from just 28 percent of respondents, compared to 51 percent who expressed disapproval.

Worryingly for the Democrats, Suffolk University found 46 percent of Americans held a favourable view of ex-POTUS Donald Trump, 75, compared to 50 percent who have an unfavourable view.

In a rerun of the 2020 US Presidential Election, Suffolk University found Americans would now vote for Donald Trump to defeat his successor by 44 percent to 40 percent.

Following defeat for the Democrats in Virginia, eyes will also turn to next year’s midterm elections and the 2024 US Presidential Election.

Biden, who will turn 82 when Americans next vote in a general election, has vowed to run for a second term.

While Harris has been tipped as a favourite to take the Democratic mantle in 2024, the decision to elevate ex-Indiana Mayor Pete Buttigieg, 39, to US Transport Secretary has been deemed a cause for concern with the Vice President’s team.