‘That back roll was definitely not there two weeks ago!’: Vicky Pattison embraces her post holiday bikini body after ‘eating and drinking non-stop’

By Connie Rusk For Mailonline


Vicky Pattison showed off her post holiday body on Tuesday, after ‘eating and drinking non-stop’ during her Croatia trip.

Taking to Instagram, the former Geordie Shore star, 33, slipped into a rainbow patterned thong bikini ahead of jetting home with boyfriend Ercan Ramadan.

Vicky joked ‘that back roll definitely wasn’t there two weeks ago’ as she talked about how she has ‘no regrets’ for indulging during the romantic break. 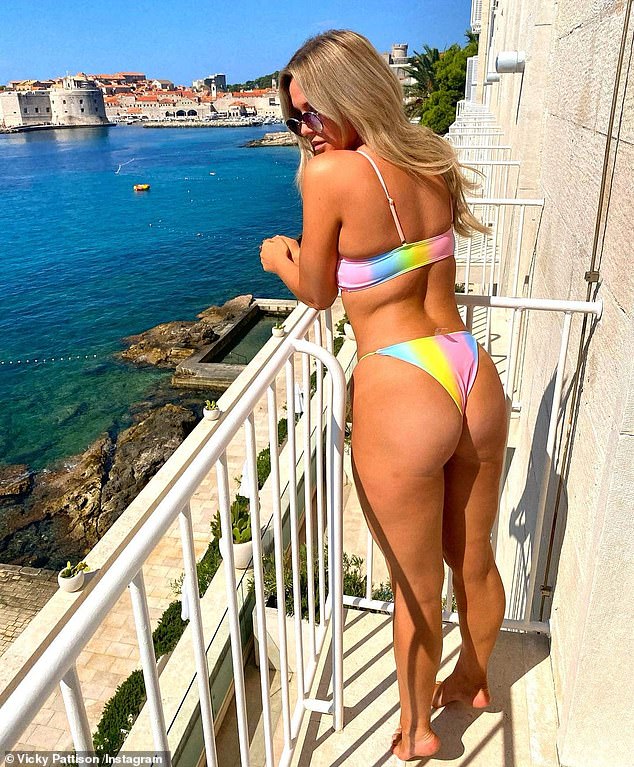 Bikini babe: Vicky Pattison put on a defiant display as she showed off her post holiday body on Tuesday, after ‘eating and drinking non-stop’ during her Croatia trip

Vicky wrote: ‘Home time…So that roll was definitely not there two weeks ago. But I suppose after the summer I’ve had I should just be feeling lucky I’m just getting away with only that.

‘Honestly though, I don’t regret a single thing… I’ve ate, drank, travelled and laughed non stop throughout august and I honestly feel so grateful that.

‘We’re able to do those things that set our souls on fire again!!! Being with my family and friends again, throwing parties and travelling- these things make me so happy and I’ll happily take a crafty back roll in exchange for all the gorgeous memories I’ve made. 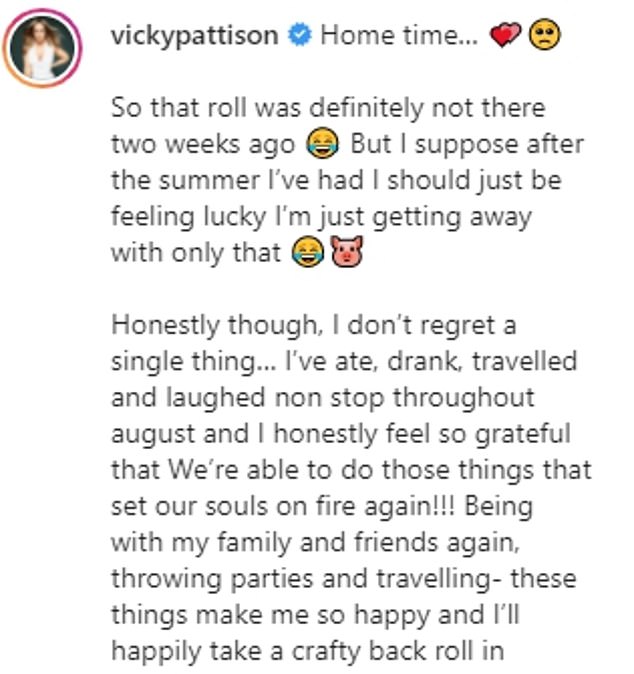 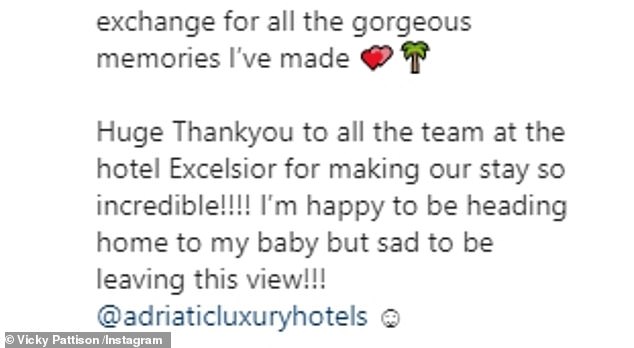 Self love: Vicky wrote: ‘Home time…So that roll was definitely not there two weeks ago’

‘Huge Thankyou to all the team at the hotel Excelsior for making our stay so incredible!!!! I’m happy to be heading home to my baby but sad to be leaving this view!!!’

While holidaying overseas, Vicky has been keeping fans updated with her romantic trip away and shared a stunning bikini snap to Instagram.

The reality star turned presenter looked to be in her element as she showed off her toned figure in the scanty swimwear that framed her bust and left her enviable frame on full display.

Her blonde tresses fell loosely underneath her chic designer hat, and she appeared to sport minimal makeup, allowing her natural beauty to shine through. 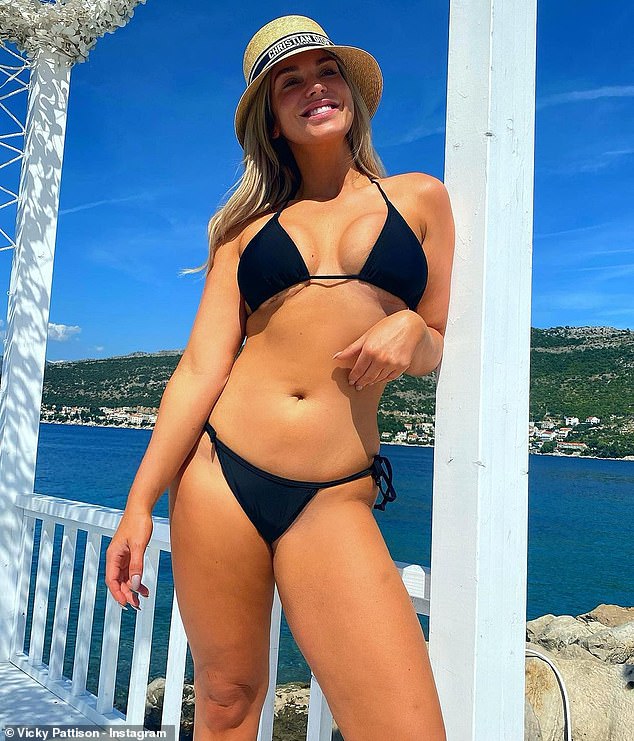 Gorgeous: The reality star appeared carefree and relaxed as she showcased her toned figure in the scanty swimwear, which she accessorised with an £887 Dior straw bucket hat 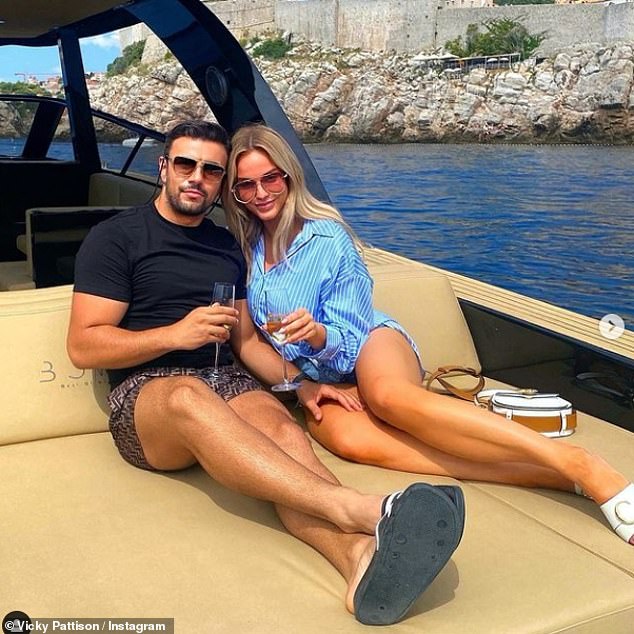 Celebration: Vicky headed out to Croatia with boyfriend Ercan Ramadan for his birthday

Vicky referenced Barry Manilow’s 1985 hit Copacabana (At the Copa) in the caption, writing: ‘Her name Lola… she was a showgirl… (and if you don’t get this reference we are not old enough to be friends,’ alongside a laughing face emoji.

Just a day prior, Vicky revealed how it’s taken her years to accept her appearance as she vowed to inspire her fans by sharing a body confident post online.

The influencer shared snaps to Instagram of her figure in a pale blue bikini, taken from different angles to highlight how the camera could be deceiving.

Documenting her body confidence journey, Vicky called on her social media followers to be kind to themselves and enjoy life regardless of how they look. 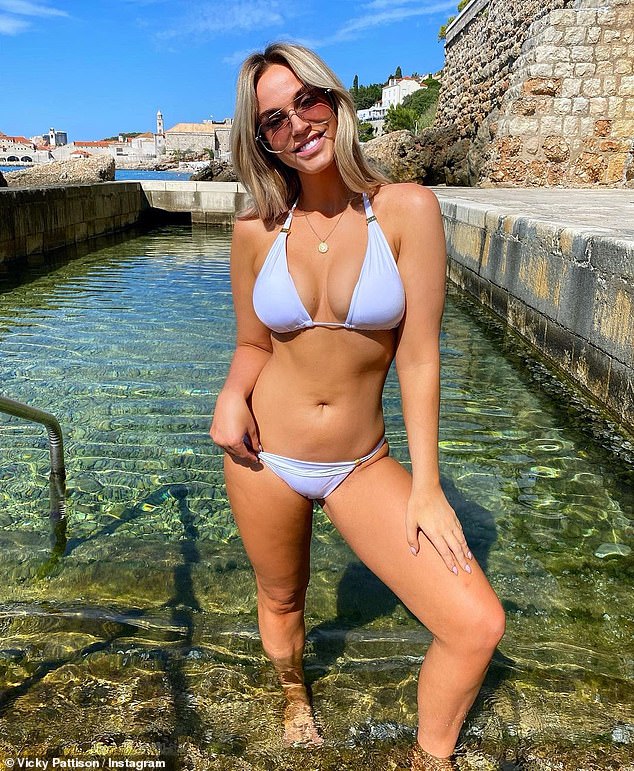 Learning to love herself: Just a day prior, Vicky revealed how it’s taken her years to accept her appearance as she vowed to inspire her fans