Whitney Port has been pictured for the first time since announcing her pregnancy last week.

The Hills vet, 36, was spotted leaving a donut shop with a bag full of goodies in Studio City on Sunday.

Whitney put comfort first for her errand run, layering up in a navy blue sweatshirt and pair of grey sweatpants. 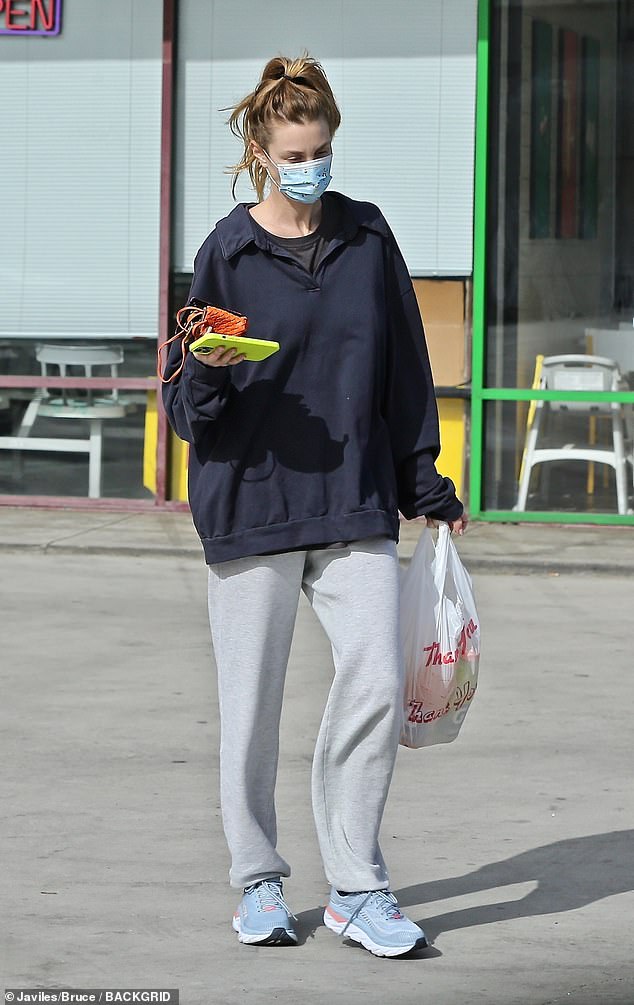 On the go! Whitney Port was spotted out in Studio City on Sunday in her first sighting since announcing her pregnancy

She slicked her blonde hair up into a ponytail and slowed the spread of COVID-19 with a surgical face mask.

Not pictured with Whitney was her husband Tim Rosenman, whom she is celebrating six years of marriage with.

Whitney revealed their plans to celebrate the special occasion on her Instagram account, where she asked fans for a last-minute caterer to work a party not only marking their anniversary, but a cousin’s birthday.

Don’t sweat it! The star put comfort first with her mismatched sweats and chunky trainers 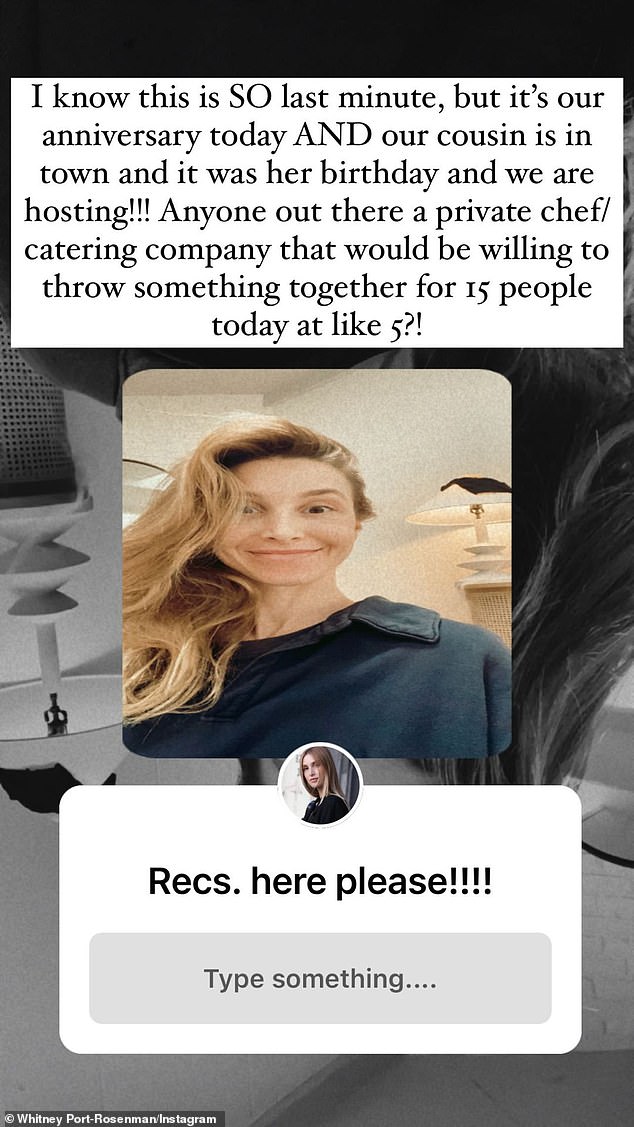 Help please! Whitney revealed their plans to celebrate the special occasion on her Instagram account, where she asked fans for a last-minute caterer to work a party not only marking their anniversary, but a cousin’s birthday

‘I know this is SO last minute, but it’s our anniversary today AND our cousin is in town and it was her birthday and we are hosting!!! Anyone out there a private chef/catering company that would be willing to throw something together for 15 people today at like 5!?’ Whitney posted on her Instagram Stories.

The message comes just a few days after Whitney revealed she is pregnant with her second child.

The Hills vet, who has suffered two heartbreaking miscarriages and a chemical pregnancy in the past, revealed in an emotional video that she was seven weeks pregnant but had received difficult news from her doctor who was ‘pessimistic’ about it. 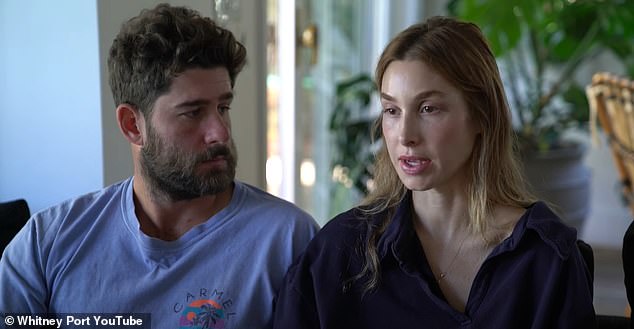 Growing family: Port announced she is pregnant with her second child in an emotional video detailing health concerns surrounding the baby last week

Whitney and her husband Tim shed tears as she recounted the tough appointment and conceded the pregnancy was likely another ‘unhealthy’ one.

However, in an update, the couple were relieved to announce that though things were still ‘touch and go’, their doctor did find an embryo and heartbeat during their most recent appointment.

‘I am currently seven weeks pregnant,’ Whitney told the camera as her husband sat beside her with tears in his eyes. ‘Which is supposed to be obviously be really exciting and it has been, up until yesterday. I have been going to the doctor and monitoring it because of my history with miscarriages. I’ve had two miscarriages and chemical pregnancy. 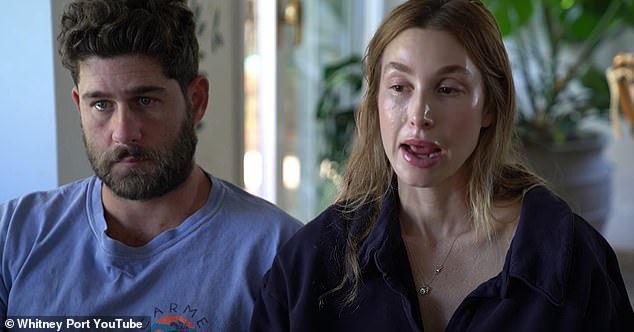 Tough news: Whitney and her husband Tim Rosenman shed tears as she recounted the difficult news and conceded the pregnancy was likely another ‘unhealthy’ one

‘And everything was looking good up until yesterday. I went to the doctor and he did an ultrasound, and at first he was like, “Scooch down a little bit,” like he couldn’t see what he thought. He thought maybe it was just a positioning thing, and then he looked a little bit deeper and whatever was happening in there was not where it was supposed to be given the week that I’m out.

She gave a shout-out to her doctor for being an ‘amazing, sensitive, sweet guy’ before revealing, ‘He said that he was pessimistic about this pregnancy and that he told me to get blood drawn so I would, I will get blood results back today and see if numbers are going up or going down. He thinks they’ll likely be going down and then he is having me come in for another ultrasound on Monday.

‘The moral of the story is that this is likely another unhealthy pregnancy and I just couldn’t really… It’s such a huge part of our lives right now and it affects everything, like physically and mentally and everything that we do and so it just felt like an opportunity to just share it because I couldn’t just sit here and go on with my life and not share it and I know that there’s likely so many people out there that have had to deal with this and I feel on hand extremely grateful for Sonny, for the fact that we have Sonny and we have each other, that everything else is extremely wonderful. 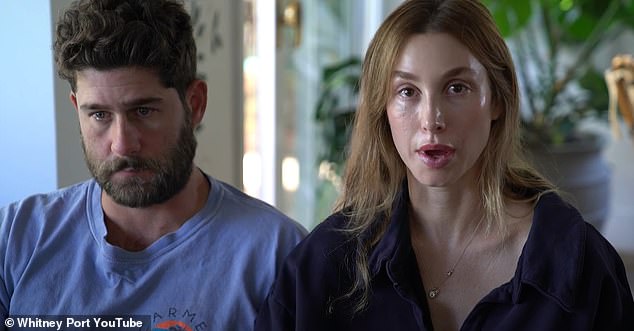 Emotional: Tim shed tears as he listened to his wife describe the difficult doctor’s appointment 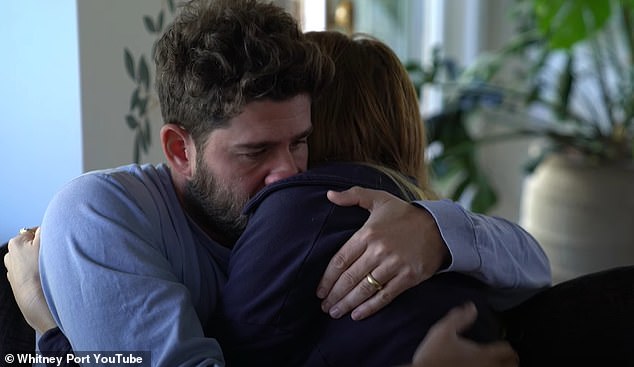 Tender loving care: Tim later comforted his wife with words of encouragement and a fierce hug

‘But I definitely feel just scared for myself and my confidence and my self worth and what this means for that.

‘And also for not being able to give this family what I think would be the best for it. The emotions are obviously very complicated. I still feel very, very pregnant. Like my boobs are very sore and I’m like extremely hungry and just very achy but I obviously don’t know what’s going on inside my body.’

Tim later comforted his wife with words of encouragement and a fierce hug.

‘I understand all your feelings, I don’t want to try and talk you out of any of them. I don’t feel like you’ve disappointed us and we’ll figure out how we add to our family and what that looks like when the time is right,’ Tim said before later pulling her in for a hug. 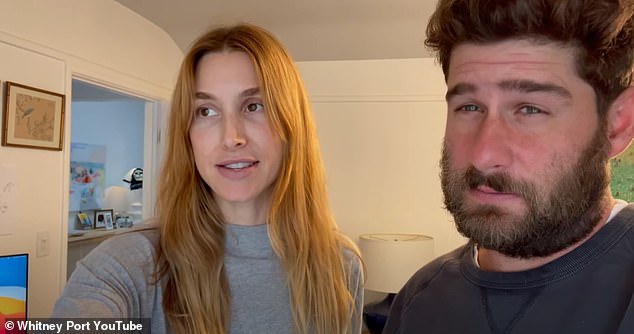 Good news! Later in the video, the couple were relieved to reveal that they had received good news from the doctor about the baby

Later in the video, the couple were happy to reveal that they had received good news from the doctor about the baby.

During their most recent appointment, their doctor saw an embryo and a heartbeat.

‘We went today to the doctor and the doctor actually saw an embryo and a heartbeat which was something we were not expecting. I was living like this weekend as though today he was probably going to tell us it was over.

‘But we wanted to keep you posted just because, I think for both of us, we feel like keeping this a secret feels weird and wrong. Sharing this with you just feels right. It is still very much touch and go, we’ll have another ultrasound next week, but as you all know we’re in the first trimester and during the first trimester anything can happen.’ 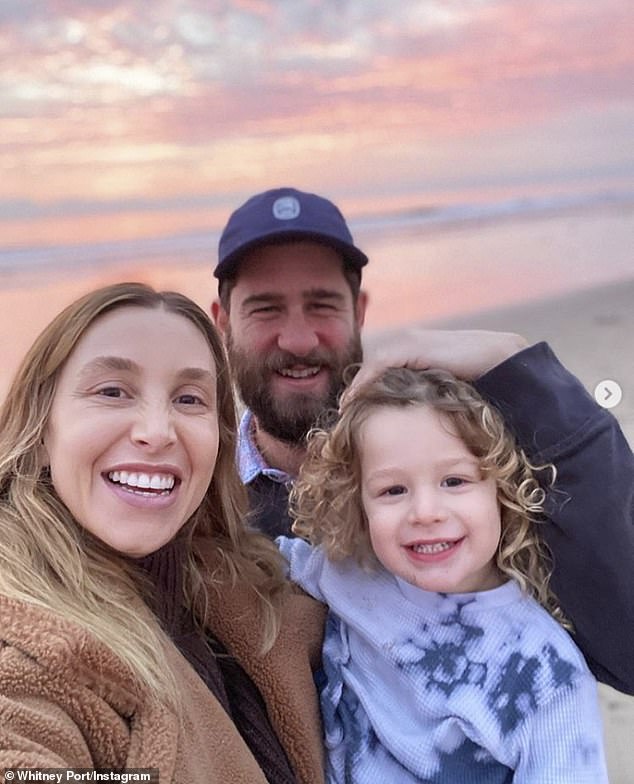 On her Instagram Stories, Whitney described the pregnancy as a ‘rollercoaster’ and described why she wanted to share the news with fans.

‘Been a really rough couple of weeks,’ Whitney wrote. ‘I’ve been going back and forth about how and when to share with everyone. This whole “sharing your life” thing on social media is hard to navigate but basically, Timmy and I have been trying to get pregnant again.

‘Sooo, in the simplest terms, we are currently pregnant. It’s been a rollercoaster and it’s still very much touch and go but it has felt like too much to hold in.’ 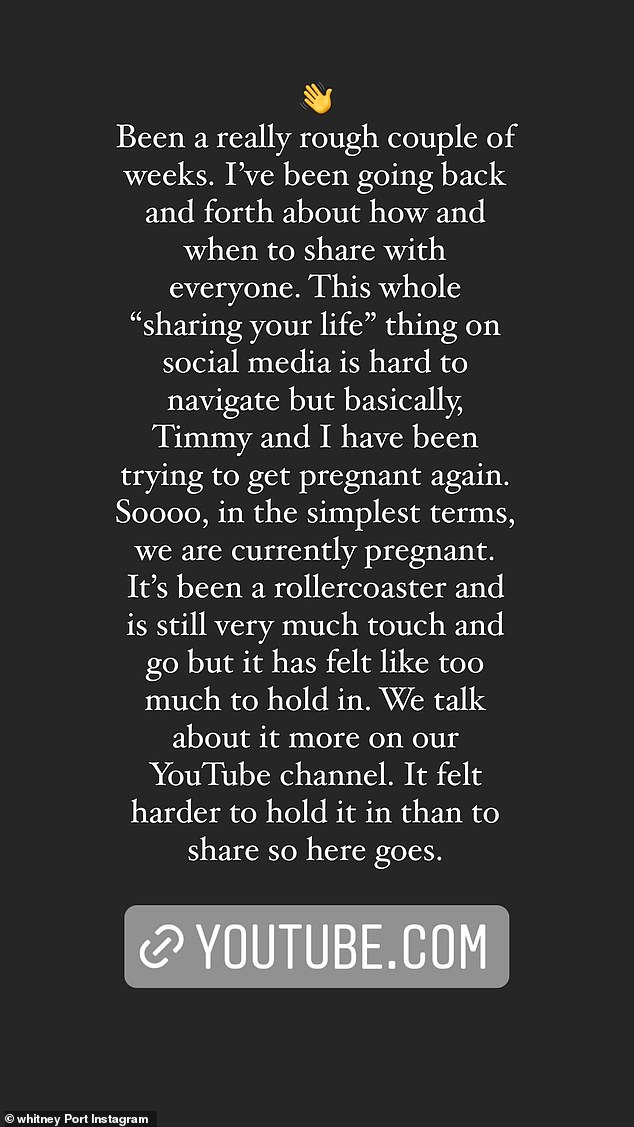 ‘Touch and go’: On her Instagram Stories, Whitney described the pregnancy as a ‘rollercoaster’ and described why she wanted to share the news with fans

In another post showing off her stylish outfit, she thanked everyone for the outpouring of support she received after announcing the pregnancy.

‘Thank you to everyone for the outpouring of support and love yesterday. It felt weird to talk about my pregnancy so early, but it didn’t feel right to hold it in. Now we can REALLY go through this process together with no secrets, no hiding, just truths.’

Whitney and her husband of six years share four-year-old son Sonny together.

The MTV vet has been candid with fans about her struggles expanding her family in recent years.

Revealing the heartbreaking news of her pregnancy earlier this year, she wrote: ‘I’m sad but I’m ok and we will try again.

‘I also have so much sadness in my heart for anyone that has to go through this or has gone through this. I know though that our community will share, band together and support- cause you always do.’ 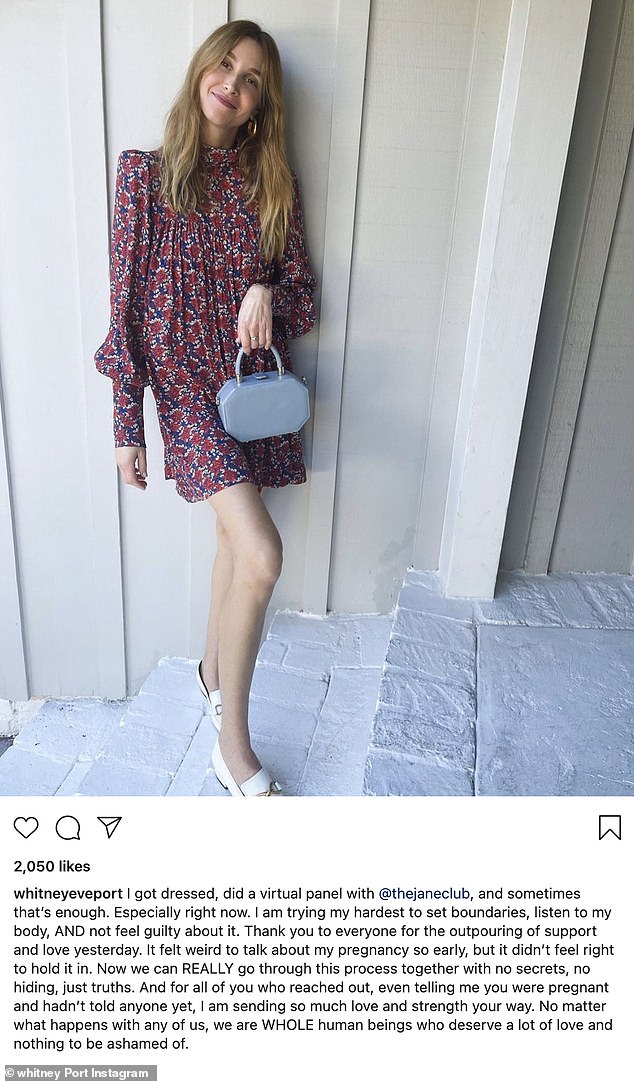 Showing their support: The City vet also thanked fans for their ‘outpouring of support and love’ after she posted the video