It’s not only humans who hate bullies – dwarf mongooses do too, a new study has revealed.

Researchers from the University of Bristol found that the animals can remember which groupmates have picked fights with others during the day and give them the ‘cold shoulder’ later in the evening.

Observing wild mongooses up close allowed the team to explore how wild animals manage ‘within-group conflict’ – something that is a key feature of human lives.

They simulated food contests between two group members in the afternoon by playing back sounds of aggression and watching how others responded.

Individuals not involved in the altercations were found to both track this aggressive behaviour, and act on it at a later time, the team found.

When back in the sleeping burrow at night, those deemed to be ‘squabbling’ were ignored and given the cold shoulder by their groupmates. 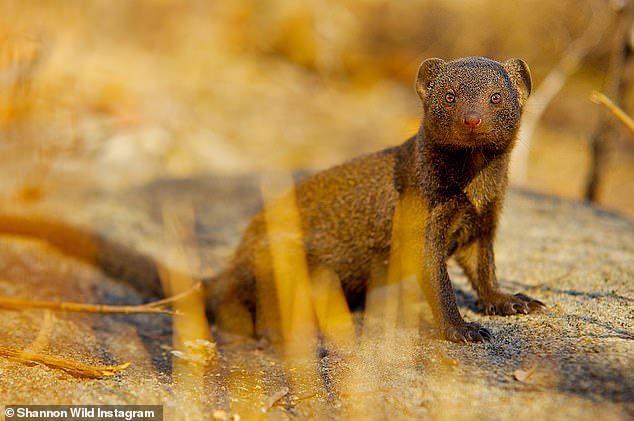 It has a large pointed head, small ears, a long tail, short limbs and long claws.

They have soft fur that varies in colour from yellowish red to very dark brown.

They are small, reaching up to 11 inches and weighing 12oz, making them the smallest carnivores in Africa.

They live in dry grasslands, open forests and bush land, particularly in areas with termite mounds.

Its a highly social species living in extended family groups of two to thirty with a strict hierarchy.

They have been seen in humans, chimpanzees, ravens and even domestic dogs.

‘Our work demonstrates that dwarf mongooses have sufficient cognitive ability to monitor vocal cues about aggressive interactions and to remember who the bullies are, refusing to groom with them later,’ the researcher explained.

Dwarf Mongoose, the smallest carnivore in Africa, have been extensively studied since 2011, as part of a wider research project into their habits and behaviour.

To better understand how they interact, including how they deal with bullies, researchers individually marked study animals within a wild habitat with blonde hair dye, and trained them to climb onto a balance scale to weigh themselves.

They can then be watched from a few feet away as they go about their natural behaviour in ecologically valid conditions.

This allows the researchers to design experiments involving the mongoose, without having to remove them from their native habitat, which could result in altered or unnatural results.

To determine how they handle aggressors and bullies, researchers designed an experiment that involved mocking up a fight between two animals over food.

The team recorded the sounds made by the aggressor and the victim, and played them back for the group on an occasion when there was no aggression.

The rest of the group heard what sounded like repeated squabbles between the innocent pairing, making them think one was being a bully. 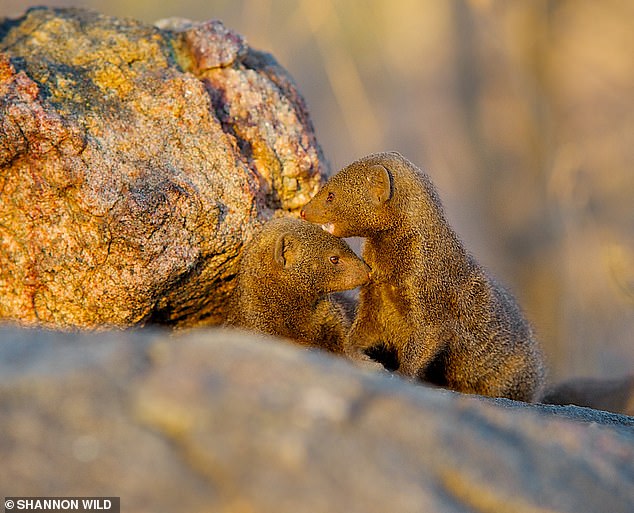 Observing wild mongooses up close allowed experts from the University of Bristol to watch their interactions, and test ideas around their behaviour in natural conditions

They also recorded all the grooming that individuals engaged in with their groupmates back at the sleeping burrow in the evening.

When they played the sound of squabbling, the victim of the perceived bullying was given more grooming than when there was no bullying.

The victims also ignored their bully when they got back to the sleeping burrow and the bully was groomed ‘substantially less’ than on a normal occasion. 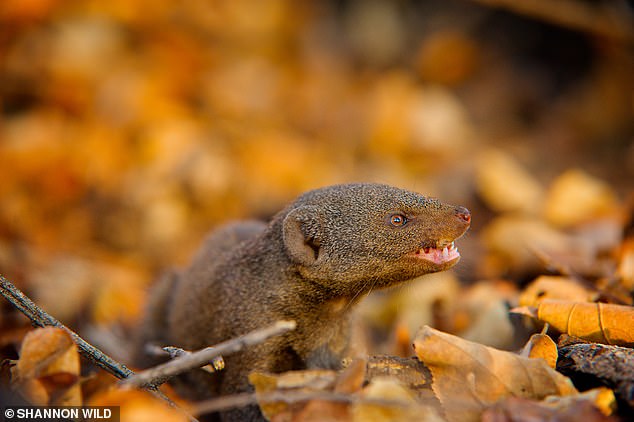 The team wanted to explore how wild animals manage ‘within-group conflict,’ something that is a key feature of human lives, and that of other social animals

Dr Morris-Drake said: ‘This shows that dwarf mongooses keep tabs on conflict occurring between their groupmates.

‘They can identify bullies just from the vocalisations given during disputes, store this information and implement a delayed conflict-management strategy, in this case giving the bully the cold shoulder before bedtime.’

These findings help researchers better understand how animals handle past altercations between groupmates.

The findings have been published in the journal eLife.

Mongooses live in a ‘fairer society’ because mothers can’t tell which pups are their own so are forced to help the most ‘needy’, researchers say

Mongooses have evolved into a ‘fairer society’ because mothers cannot tell which pups are their own, forcing them to help the most ‘needy’ instead, researchers claim.

They say a ‘veil of ignorance’ over parentage is created because groups of banded mongoose give birth on the same night and do not know which offspring is theirs.

It means they cannot give them extra care but instead look after the smallest pups in the community.

‘In most of the natural world, parents favour their own young,’ said Dr Harry Marshall, of the University of Roehampton, which led the study with the Exeter University.

‘However, in banded mongooses, the evolution of remarkable birth synchrony has led to the unusual situation that mothers don’t know which pups are their own, and therefore cannot choose to give them extra care.

‘Our study shows that this ignorance leads to a fairer allocation of resources – in effect, a fairer society.’

In the study, half of the pregnant mothers in wild mongoose groups were regularly given extra food.

This led to increased inequality in the birth weight of pups.

But after giving birth, the well-fed mothers gave extra care to the smaller pups born to the unfed mothers – rather than their own pups. This led to the differences in size quickly disappearing.