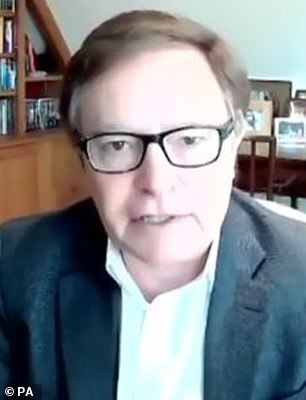 Professor Anthony Harnden, deputy chairman of the Joint Committee on Vaccination and Immunisation (JCVI), said ministers’ proposal to drop the waiting time between jabs could lead to weaker immunity in younger people

Halving the gap between Covid vaccines to just four weeks could actually cause infections to rise, a Government adviser warned today.

Jabs are currently spaced at eight weeks but ministers are keen to speed up the pace to ensure the maximum amount of the population are fully protected after restrictions ease on ‘Freedom Day’ next Monday.

But Professor Anthony Harnden, deputy chairman of the Joint Committee on Vaccination and Immunisation (JCVI) — which advises No10 on the roll-out — claimed there would be no ‘gain’ from cutting the gap.

He said data shows a four-week interval causes a much lower immune response, meaning people who get the jabs after a shorter time-frame get less protection against the virus.

Other JCVI advisers have also called for No10 not to change tack in its fight against the third wave, echoing Professor Harnden’s concerns.

The Oxford University professor also added it would be ‘brilliant’ if England’s football team got involved in an advertising campaign to encourage young people to book their vaccine, with rates slipping in the rollout despite millions of people left.

Discussing calls to halve gaps between doses, Professor Harnden told Times Radio: ‘We’ve looked at this data very carefully over the last few days and it is quite clear, from the AstraZeneca vaccine, there is absolutely no doubt the longer interval gives you much better protection.

‘But we concentrated on the Pfizer vaccine because of course that’s one that’s being given to younger people at the moment.

‘And it’s quite clear from antibody T cells studies that you get much lower response, and poorer quality memory response, with the shorter interval — that’s a four-week interval compared to an eight- to 12-week interval.

‘And the actual real data vaccine effectiveness studies show that there is a lower vaccine efficacy against symptomatic disease with shorter intervals compared to longer intervals.’ 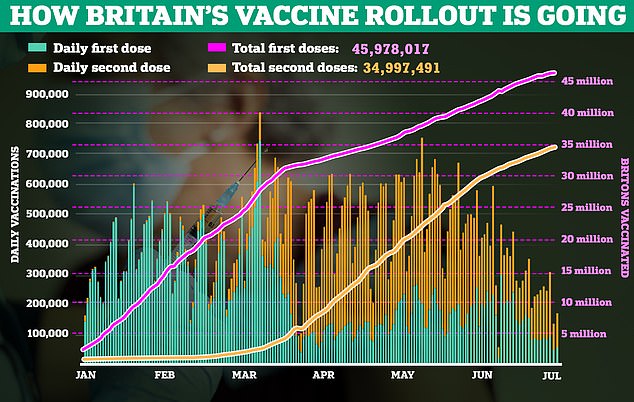 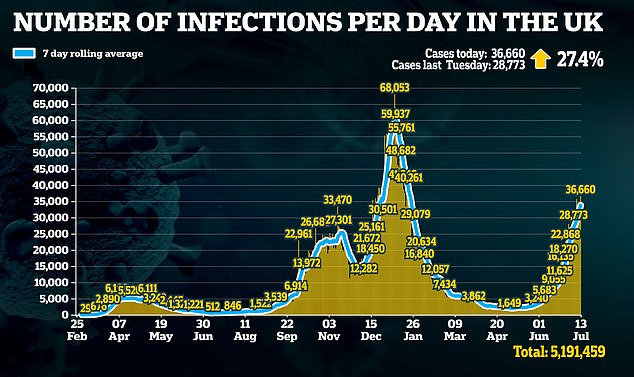 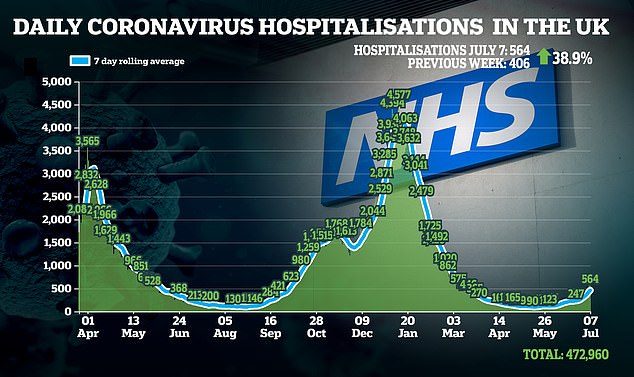 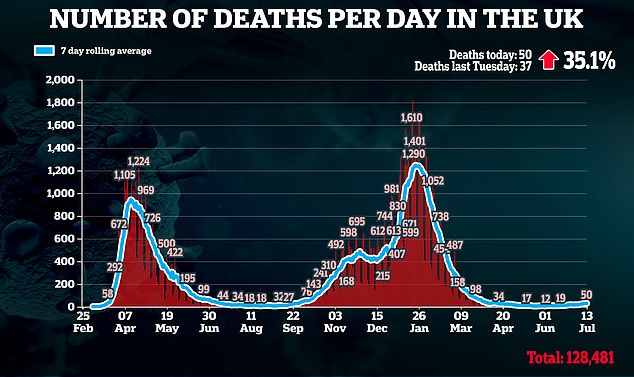 He added: ‘Then we got the modellers to look at this and, actually, the number of infections will rise if we reduce the dose.

‘We just don’t think there’s any good short, or longer term gain by shortening the interval.’

Ministers set up a potential Covid clash with owners of nightclubs and other large venues today with a threat to force them to use Covid passports to admit revellers.

From July 19 places which host mass entertainment events indoors are being urged to require ‘Covid certification’ of vaccination status as a condition of entry.

But guidance released by the Government last night warned that it will consider making the system ‘mandatory’ in future if steps to limit the spread of Covid are not taken by firms.

The small print could set up a bitter row with businesses, after nightlife firms suggested that the passports would seriously impede their operation.

Michael Kill, chief executive of the Night Time Industries Association, said : ‘We are hugely concerned that the Government have caused yet more confusion by suggesting these measures are not mandatory while, at the same time, the details reveal clearly that this could well be the case in future.

‘This type of ambiguous communication is creating chaos amongst customers and operators, and presents a very different ”Freedom Day” to what we have all looked forward to.’

Peter Marks, chief executive of REKOM UK, which owns 42 nightclubs including chains Pryzm, Bar&Beyond, Eden and Fiction, last night said he was ‘thrilled’ to be able to reopen next Monday ‘at full capacity and without any requirement for a negative Covid test, something we believe would create a barrier to both customer enjoyment and getting the industry back on its feet’.

He said reopened nightclubs will operate as pubs are currently running, adding: ‘We’re able to open in this way because nightclubs in particular are among the best equipped venues in the hospitality sector, and indeed were even prior to the pandemic, for the exact safety measures that are required to reduce the spread of the virus.

‘These include air ventilation systems in all our venues which change air every five minutes on average, sanitisation stations throughout all our clubs, increased frequency of cleaning schedules compared to before the pandemic, and highly trained staff and experienced door staff who are well-versed in crowd management protocols.

‘Together, these measures mean that clubs are well placed to open and provide unforgettable nights out once again.’

Ministers would not say exactly which venues would be encouraged to bring in the passports – but did say they included places where people were ‘likely to be in close proximity to others outside their household’.

This could mean theatres, cinemas, busy pubs, indoor concerts and any other crowded indoor event.

Scientists say spacing out doses leads to a better priming of the immune system to fight off the virus.

Originally, both AstraZeneca and Pfizer’s vaccines were approved to be dished out in three-week intervals because that was the gap tested in the research trials.

But No10’s scientists pushed the regimen back to 12 weeks to get wider protection in winter, when the second wave started to take off.

They said the decision would allow more people to get some immunity against the disease in the shortest period of time possible.

Two weeks ago, the JCVI recommended cutting the gap to eight weeks for everyone, in a bid to protect more people.

Health chiefs already fear the UK may be close to maximum vaccine uptake, with young people having been eligible for appointments for almost a month.

The roll-out has ground to fewer than 100,000 first doses a day, with the UK’s drive currently centered on ensuring millions get fully inoculated.

Young people — the last group to be inoculated — are less likely to get the jab than others because they see themselves as not at threat from the virus.

Ministers are hoping, however, that a double-jab requirement for holidays and to avoid self-isolation will bolster uptake.

Professor Harnden said uptake of jabs among younger age groups may increase if vaccines are more accessible and are backed by role models.

He added that the JCVI is ‘concerned’ about the uptake of first doses among younger age groups.

Asked whether the England team could be part of an advertising campaign, he said: ‘I think it’d be a brilliant idea — the England team have captured the whole country’s attention over the last four weeks.

‘And many of them, the young role models — I think it would be wonderful if they were able to contribute in some sort of way to encouraging young, particularly young men to be vaccinated.’

The JCVI has been asked to issue urgent advice on whether the pros and cons of slashing the gap between doses, the Sunday Times claimed. An announcement is expected within days.

Experts fear leaving young people only partially protected for longer amid a second wave could drive up rates of ‘long Covid’.

Some vaccine centres are dishing out second doses early amid a glut in demand for first jabs.

But NHS England has wrapped many centres on the knuckles for doing this, insisting they must stick to the eight-week delay.

Many countries never widened the gap between jabs, saying they had to be lead by the science and had no evidence to support doing so.

Professor Finn told BBC Radio 4’s Today programme: ‘I think we would need to be pretty careful about trying to change the approach right now in the middle of this third wave.

‘There is of course an advantage in giving the second dose early, in the current circumstances with all the cases that we are seeing because you get a further boost,

‘But the downside to that is the size of that boost is smaller and probably that will mean that the duration of protection you get from that second dose will be shorter.

‘So there’s a sweet spot, and at the moment the advice we have given is we should not reduce the interval less than eight weeks.’