The mystery of why Eleonora’s falcons migrate longer routes in a complex ‘zig-zag’ pattern has long baffled scientists.

But they are now a step closer to unravelling the answer after discovering the birds do it not only to benefit from stronger tailwinds but also to make detours for food and to avoid the hinderance of tropical rainforests.

This is because the heat and rain can impact soaring and flapping flight when the falcons fly over them. 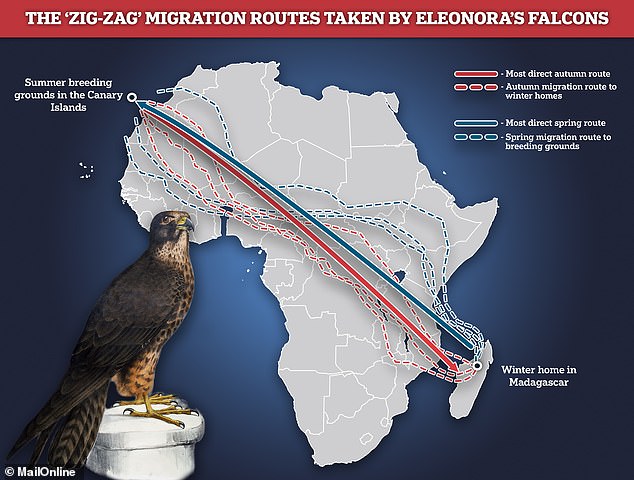 Migration: Eleonora’s falcons fly in a ‘zig-zag’ pattern and take detours when migrating from Madagascar to the Canary Islands rather than taking the shortest, more direct route (pictured)

WHY DO ELEONORA’S FALCONS MIGRATE IN A ‘ZIG-ZAG’ PATTERN?

There are several reasons why Eleonora’s falcons migrate from the Canary Islands to Madagascar in a complex ‘zig-zag’ pattern.

One of the main reasons they don’t fly direct is to take advantage of strong tailwinds and to ensure they have as little headwind as possible, a study by the University of Amsterdam found.

However, they also make detours for food and to avoid certain landscapes, such as the tropical rainforest of the Congo Basin in the autumn and over the Sahara in the spring.

This is because the heat can hinder the birds’ soaring capabilities, while the rain above the Congo Basin impacts on their flapping flight, researchers said.

However, the question still remains as to how the falcons manage to find and navigate these complex routes.

Researchers wanted to know why the birds do not take the shortest route to reach their winter homes in Madagascar from their breeding grounds in the Canary Islands, as well as vice versa.

However, the study by the University of Amsterdam and Spain’s Doñana Biological Station found the birds actually travel more than 5,500 miles (9,000km) on average in the autumn and more than 6,800 miles (11,000km) in the spring.

They also spend six days more on stopovers in the spring than in the autumn.

The study combined data from GPS trackers fitted to the falcons with global weather models and satellite imagery to discover how Africa’s seasonal winds and diverse landscape shape the migration of Eleonora’s falcons.

‘It is striking that the number of flight hours travelled in spring and autumn are the same, even though the spring routes are considerably longer,’ said lead author Wouter Vansteelant, of the University of Amsterdam.

‘There was a simple explanation for this when we linked it to wind data: the birds benefit from a stronger tailwind in the spring.’

To see how much the zig-zagging behaviour helped the falcons maximise tailwinds across different landscapes, Vansteelant and his colleagues compared the birds’ tailwinds at various points along the route of their chosen migratory path with the tailwinds they could have received on the shortest possible route.

‘It turned out that the falcons zig-zagged in both spring and autumn to get as much tailwind as possible – or as little headwind as possible – during the terrifying crossings of the Sahara desert and the Indian Ocean,’ Vansteelant said.

‘That’s a common and well-known strategy among migratory birds.’ 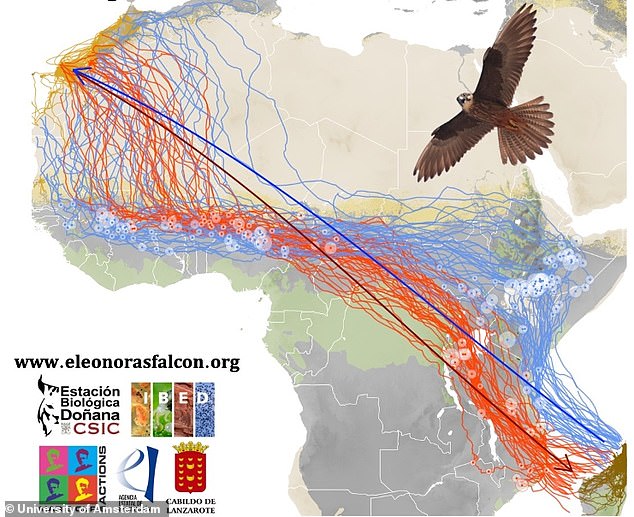 The researchers also saw that the falcons made direct eastward or westward flights over the Sahel-Sudan zone in both seasons, giving them less tailwind than they could have found on a shorter route.

However, the wind is relatively weak in this region, and these east or west detours allowed the falcons to drastically reduce the flight distance over the tropical rainforest of the Congo Basin in the autumn and over the Sahara in the spring. 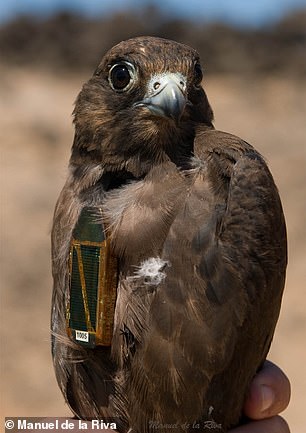 Complex: The mystery of why Eleonora’s falcons migrate longer routes in a ‘zig-zag’ pattern has long baffled scientists. They fitted the birds with GPS trackers (pictured) in a bid to learn more about their behaviour

This is because the heat can hinder the birds’ soaring capabilities, while the rain above the Congo Basin impacts on their flapping flight, researchers said.

‘It is likely that many more species of migratory birds respond to wind conditions in a similarly flexible way.

‘When faced with strong headwinds, birds are better off drifting away from the shortest route until they can get back on track through weaker or more supportive wind fields.

‘When the wind is weak or favourable, on the other hand, birds can also take detours for other reasons, such as to circumvent barriers or to visit quality feeding areas.’

Despite the discovery, the question still remains as to how the falcons manage to find and navigate these complex routes.

Vansteelant said: ‘We have now been able to follow a number of falcons for up to four consecutive years.

‘Based on that data, we will be able to find out how consistent they are in their individual route choices and timing, and to what extent they improve their migratory performance through experience.’

The study has been published in the journal Movement Ecology.

WHY DO MIGRATING BIRDS FLY IN A V-FORMATION?

Birds fly in a v-formation to help them fly more efficiently, staying aloft while expending as little energy as possible.

Scientists learned the aviation secrets of migrating birds after attaching tiny logging devices to a flock of 14 northern bald ibises that not only tracked their position and speed by satellite but measured every flap of their wings.

The 14 birds used in the study were hand-reared at Vienna Zoo in Austria by the Waldrappteam, an Austrian conservation group that is re-introducing northern bald ibeses to Europe.

Birds fly in a v-formation to help them fly more efficiently, staying aloft while expending as little energy as possible (stock image)

The birds were studied as they flew alongside a microlight on their migration route from Austria to their winter home in Tuscany, Italy.

Lead researcher Dr Steve Portugal, from the Royal Veterinary College, University of London, said: ‘The distinctive V-formation of bird flocks has long intrigued researchers and continues to attract both scientific and popular attention, however a definitive account of the aerodynamic implications of these formations has remained elusive until now.

‘The intricate mechanisms involved in V-formation flight indicate remarkable awareness and ability of birds to respond to the wingpath of nearby flock-mates. Birds in V-formation seem to have developed complex phasing strategies to cope with the dynamic wakes produced by flapping wings.’

When flying in a V formation, the birds’ wing flaps were approximately ‘in-phase’, meaning all the wing tips followed roughly the same path, the scientists found.

This helped each bird capture extra lift from the upwash of its neighbour in front.

Occasional shifts of position within the formation meant that at times birds flew directly one behind the other.

When this happened, the birds altered their wing beats to an out-of-phase pattern to avoid being caught by downwash.