The melting of Greenland’s ice sheets is ‘heightening worldwide flood risks,’ according to a new study that found more than 3.5 trillion tons have disappeared in the past decade.

A team of scientists, led by those at the University of Leeds, determined the melting has increased global sea levels worldwide by one centimeter using satellite data of the massive ice sheets.

One third of the rise occurred in just two summers — 2012 and 2019 — when extreme weather led to record-breaking levels of ice melting that has not been observed in the past 40 years.

During these summers, warm air traveled over much of the ice sheet margin, the place between ice and the glacier, leading to increased surface melting.

The newly captured satellite images showed ice melt varied dramatically depending on the season and that it was greatly caused by heatwaves flowing around Greenland. 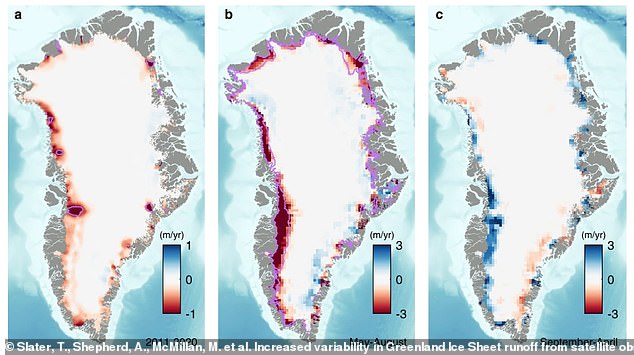 The melting of Greenland’s ice sheets is ‘heightening worldwide flood risks,’ according to a new study that found more than 3.5 trillion tons have disappeared in the past decade

Scientists have estimated the melting from Greenland’s ice sheet has caused around 25 percent of global sea level rise seen over the last few decades.

If all of Greenland’s ice were to melt, the global sea level would increase by another 20 feet – but this is not expected to happen anytime soon.

Thomas Slater, from the University of Leeds Centre for Polar Observation and Modelling and lead author, told AFP: ‘As we’ve seen with other parts of the world, Greenland is also vulnerable to an increase in extreme weather events.

‘As our climate warms, it’s reasonable to expect that the instances of extreme melting in Greenland will happen more often.’ 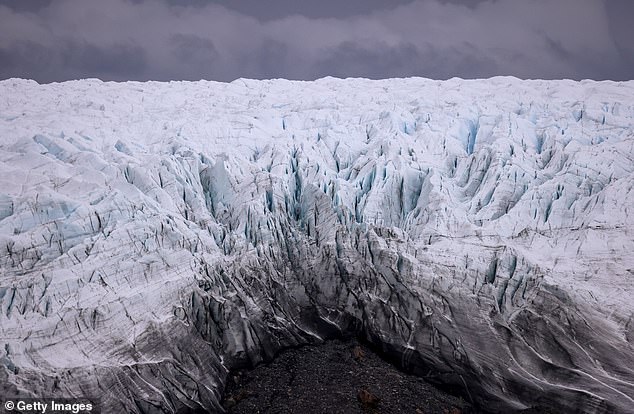 Slater and his colleagues used a CryoSat-2 satellite to collect ice melt measurements from January 2011 through October 2020 in order to calculate surface elevation changes across the Greenland Ice Sheet, the team wrote in the study published in Nature.

This data was then compared to 15,380 contemporaneous and independent estimates determined from airborne laser altimetry, a device on planet-orbiting satellites to map Earth’s terrain – all of which showed how much of Greenland’s ice sheets have melted.

According to NASA: ‘The elevations of surface features can be calculated by comparing how long it takes a laser pulse to echo back at different locations.’

The team provided an example of data collected in 2012, which revealed changes in atmospheric patterns caused unusually warm air to hover over the ice sheet for weeks, more than 527 billion tons of ice was lost.

‘These new spaceborne estimates of runoff will help us to understand complex ice melt processes better… and just enable us to refine our estimates of future sea-level rise.’

This extreme melting was the result of heatwaves in northern Greenland that raised temperatures to more than 68 degrees Fahrenheit – double the average summer temperature, according to the Danish Meteorological Institute.

While that volume was less than the record single-day ice melt in 2019, which was 12.5 billion tons, June’s event covered a larger area. 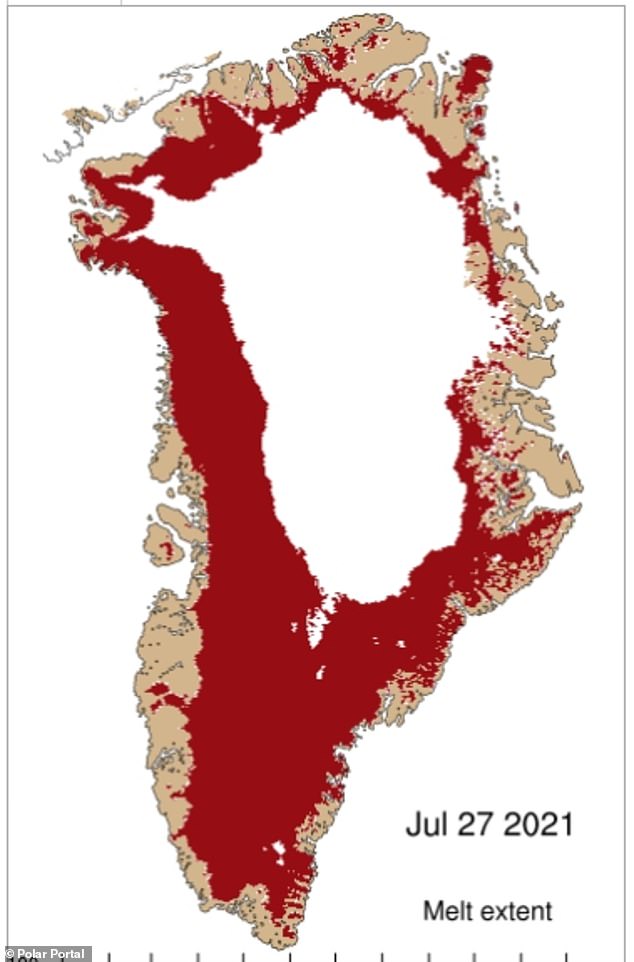 A separate observation of Greenland found its ice sheets lost 8.5 billion tons of surface mass on July 27, which is enough ice to cover Florida in two inches of water

Melting events can create feedback loops that drive further warming and melting in Greenland, according to Marco Tedesco, a climate scientist at Columbia University.

As snow melts, it exposes darker ice or ground beneath, which absorbs more sunlight rather than reflecting it back out of the atmosphere.

‘It really positions Greenland to be more vulnerable to the rest of the melting season,’ Tedesco, research professor at Columbia University´s Lamont-Doherty Earth Observatory, told Reuters.

The Greenland ice sheet is the second largest mass of freshwater ice on the planet, with nearly 695,000 square miles, second only to Antarctica.

The melting of the ice sheets started in 1990 and has accelerated since 2000.

The mass loss in recent years is approximately four times greater than it was before 2000, say the researchers at Polar Portal.

Greenland’s melting typically starts in June and lasts until August, but data shows the island has lost more than 100 billion tons of ice since June.

Global sea levels could rise as much as 1.2 metres (4 feet) by 2300 even if we meet the 2015 Paris climate goals, scientists have warned.

The long-term change will be driven by a thaw of ice from Greenland to Antarctica that is set to re-draw global coastlines.

Sea level rise threatens cities from Shanghai to London, to low-lying swathes of Florida or Bangladesh, and to entire nations such as the Maldives.

It is vital that we curb emissions as soon as possible to avoid an even greater rise, a German-led team of researchers said in a new report.

Targets set by the accords include cutting greenhouse gas emissions to net zero in the second half of this century.

In addition, water naturally expands as it warms above four degrees Celsius (39.2°F).

Every five years of delay beyond 2020 in peaking global emissions would mean an extra 20 centimetres (8 inches) of sea level rise by 2300.

‘Sea level is often communicated as a really slow process that you can’t do much about … but the next 30 years really matter,’ said lead author Dr Matthias Mengel, of the Potsdam Institute for Climate Impact Research, in Potsdam, Germany.

None of the nearly 200 governments to sign the Paris Accords are on track to meet its pledges.