By Mark Mcgreal and Ashleigh Gray For Dailymail.Com


Katie Holmes looked nice and warm despite the bitter cold on the set of Rare Objects.

The actress, 42, wore jean jacket with a matching pair of blue jeans and an orange beanie on the set.

She also donned a dark blue face covering and a brown purse slung over her shoulder. 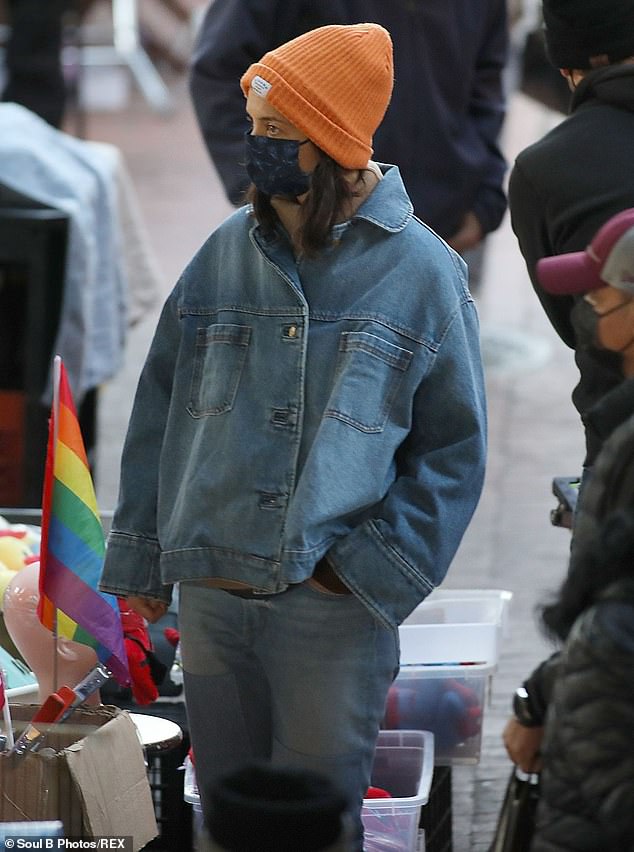 All bundled up: Katie Holmes looked nice and warm despite the bitter cold on the set of Rare Objects

Holmes’ hair, though covered by the beanie, still fell to the top of her shoulders. As she stood off to the side, she was surrounded by a number of flags including ones from the United States, Mexico and the Dominican Republic.

It was daytime as she plugged away on the feature, which is coming to fruition via her production company Lafayette Pictures.

On Friday night, Katie made a rare appearance on Instagram as she showed her 2.3 million followers a look at her work.

In two images posted via Instagram Stories the mom-of-one shared a behind-the-scenes perspective from the set. 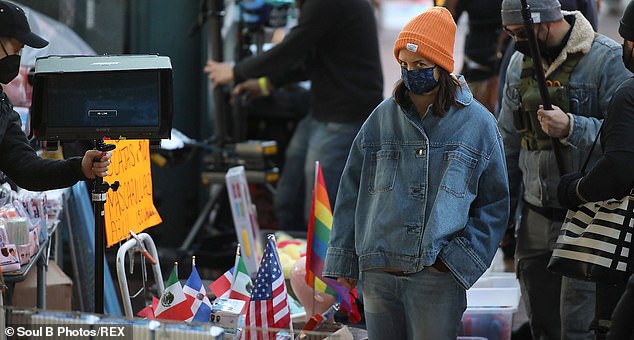 Lots of denim: The actress, 42, wore a jean jacket, matching pants and an orange beanie 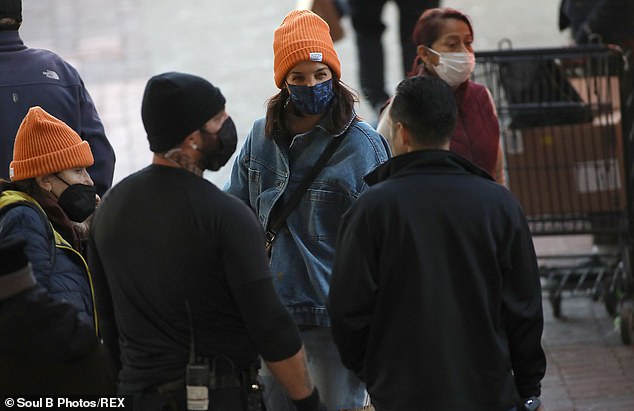 Taking a break: Holmes stood and chatted with members of the crew in between takes 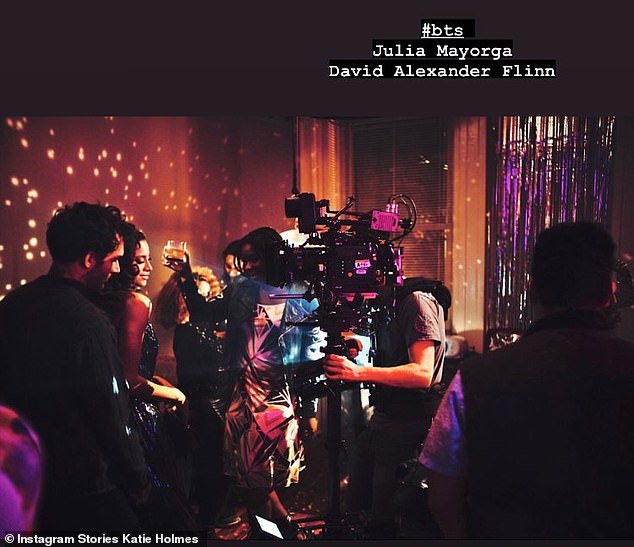 Sneak peek: A festive scene was being shot and the next outtake showed a cameraman operating film equipment in the middle of the take

‘It’s a party,’ she wrote over the first snapshot and tagged stylist Brie Welch and creative producer Jesse Korman.

Holmes has put a lot of effort into Rare Objects including adapting the novel for the screen, directing the project and starring in the film.

Rare Objects isn’t the only film she’s been working on either. She’s also been busy with a number of projects recently including an untitled project currently in post-production and set to come out next year.

The untitled film will center around two strangers who meet at an Air BnB while their relationships are not going well. 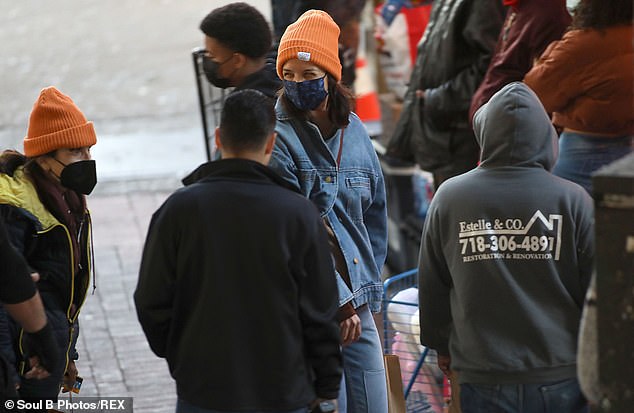 Many different roles: Holmes has many different jobs on Rare Objects including adapting the book for the screen, directing the picture and starring in the film 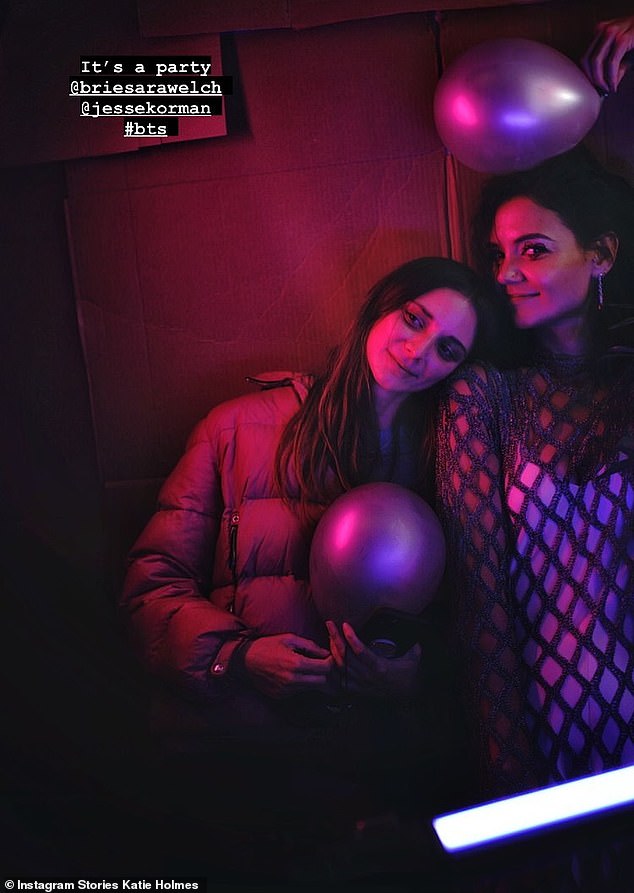 ‘It’s a party’: On Friday night Katie made a rare appearance on Instagram as she showed her 2.3 million followers a look at her work

The Logan Lucky actress has been focusing much more on her professional life than her personal life over the past few months.

An insider told E! that the star has been focusing on herself rather than her dating life.

‘It’s not something she’s spending a ton of time working on,’ the source told the publication.

Holmes broke up with her boyfriend Emilio Vitolo Jr. in May. She previously dated Jamie Foxx from 2013 to 2019 and was married to Tom Cruise from 2006 to 2012. They share their 15-year-old daughter Suri. 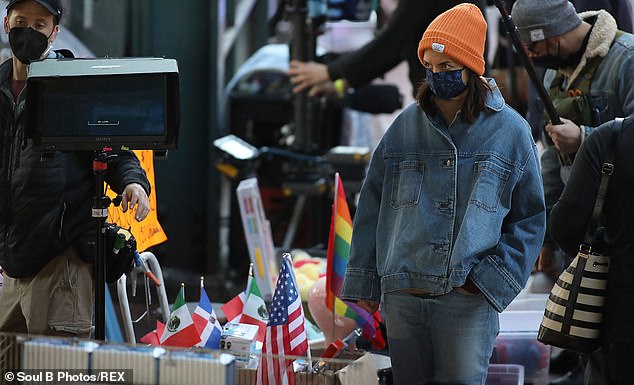 Focusing on herself: Holmes is recently single, but according to sources for E! she’s not looking for a relationship right now