Meghan Markle and Harry: Expert on ‘future’ of royal children

Meghan and Prince Harry’s decision to speak about the Royal Family and their relationship with the Firm after leaving it has been seen by a royal expert as “cashing in on the royal brand”. Former royal correspondent Duncan Larcombe said Prince Harry hasn’t been “subtle” about what he thinks of the Firm since stepping down as a working royal at the end of March 2020.

The Duke of Sussex, the commentator continued, has made it clear to the world during his recent interviews he thinks “the whole system is rotten to the core”.

Speaking to OK! magazine, Mr Larcombe added: “But by continually talking about the royals, they’re cashing in on the brand.

“If they spend their whole careers selling that royal brand, they’ll never speak to William again.”

Speaking about the Sussexes’ future work, the royal commentator, author of the biography Prince Harry: The Inside Story, also said: “Ultimately, they have to find a way to do their work in LA while not trading in on the royal brand.” 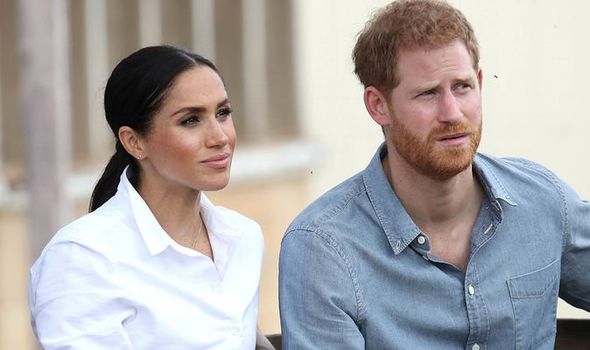 Meghan Markle and Prince Harry have been accused by a royal expert of ‘cashing in’ on the royal brand (Image: GETTY)

Prince Harry and Meghan announced in January 2020 their intention to “step back” as senior royals to carve out a new role for themselves within the Firm.

According to the statement they released, in this position they would have become part-time working members of the Firm, split between representing the Crown, their royal and military patronages and strike financially profitable deals.

However, following talks with the Queen, Prince William and Prince Charles, Prince Harry and Meghan agreed on “stepping down” on harsher terms than the ones they had described in their statement.

As a result, they can no longer carry out royal engagements and lost their military and royal patronages.

Prince Harry accused the Royal Family of ‘total neglect’ during The Me You Can’t See (Image: GETTY)

They also can’t use the word “royal” in their branding.

In turn, as they are no longer receiving the Sovereign Grant, they can now live abroad and pursue financial deals.

Almost one year after their royal exit, Meghan and Harry broke their silence on their relationship with the Firm and their experiences as its senior members.

Speaking to James Corden in a special episode of the Late Late Show, Harry said he “never walked away” from service but he chose to relocate abroad for the sake of his family after experiencing “toxic” media and public scrutiny.

Meghan Markle and Prince Harry stepped down as senior royals at the end of March 2020 (Image: GETTY)

Speaking to Oprah Winfrey, the Duke of Sussex discussed more in-depth his relationship with key members of the Royal Family.

He said he felt “let down” by his father Prince Charles and that his relationship with Prince William was of “space” at that moment.

He also accused the Royal Family of racism and neglect, and said he left the Firm and the UK because of a “lack of support and lack of understanding”.

Appearing on the podcast Armchair Expert, the Duke of Sussex made it clear he was struggling with his royal role in his 20s, before meeting his wife Meghan.

Meghan Markle and Prince Harry got married in May 2018 (Image: EXPRESS)

Discussing his early struggles with royal life, he said: “I was in my early twenties, and I was thinking I don’t want this job, I don’t want to be here.

“I don’t want to be doing this. Look what it did to my mum.

“I’ve seen behind the curtain, I’ve seen the business model and seen how this whole thing works and I don’t want to be part of this.”

However, he also said he learned to make the best of his situation and use his privilege and role to help others – which, in turn, helped him feel better.

meghan Markle and Prince Harry announced their intention to step back as senior royals in January 2020 (Image: GETTY)

During this podcast appearance, Harry also likened royal life to “a mix between the ‘Truman Show’ and being in a zoo”.

Prince Harry also spoke about the Firm, Prince Charles and Princess Diana during the docu-series he co-produced with Ms Winfrey, The Me You Can’t See.

During the five-episode series, the Duke of Sussex accused his family of “total neglect” after he asked them for help.

He also accused his family of not speaking about Princess Diana’s death and expecting him to just deal with the resulting press attention and mental distress when he was a young teen.