The former working royal has been open about his mental health struggles and about the trauma he suffered as a 12-year-old when his mother was tragically killed in a car crash in Paris. Harry, 36, has said he will delve into the lessons he has learned in his book, which will be released next year.

A source who knows the prince well told The Sunday Times Harry will touch on Meghan’s role in his healing journey.

The insider said: “In his new Californian guise, I think he’ll tell it honestly, framed in the context of his ‘journey’ towards ‘healing’.

“I think there will be a lot of the old broken me versus the new fixed me who dealt with the pain, and a lot about Meghan as the woman who liberated me to deal with it all.”

Harry has previously spoken of how his wife played a major part in waking him up to his surroundings. 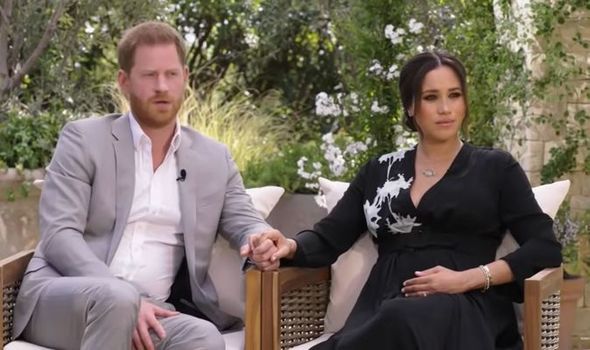 Harry will explain how Meghan ‘liberated’ him in his book, a source claims (Image: ITV)

Meghan and Harry quit the Firm in 2020 (Image: Global Citizen)

In the Sussexes’ bombshell interview with Oprah Winfrey, Harry said he believed his father and brother were “trapped” in the Royal Family.

Asked if Meghan had “saved” him, Harry replied: “Yes, without question.

“There was a bigger purpose, there were other forces at play, I think, throughout this whole process.

“I am the last person to think… but it’s undeniable, when these things have happened, where the overlap is. So, yeah, without question she saved me.”

In their tell-all with Oprah, Meghan admitted she had no idea about the constraints placed on members of the Royal Family before she married Harry in May 2018.

She claimed her freedom was severely limited and she was once told by palace aides that she could not go for lunch with her friends as they wanted to keep her out of the spotlight.

The former Suits actress also claimed she was not allowed to get help for her mental health issues because the palace disapproved.

Within days of the interview being aired, Buckingham Palace responded by saying “the whole family is saddened to learn the full extent of how challenging the last few years have been” for the Sussexes.

Meghan said her mental health suffered during her time as a working royal (Image: ITV)

Harry and Meghan are setting down deep roots in the US (Image: GETTY)

Harry has said he is writing his book to give the public an honest account of his journey.

The Duke is reported to have hired J.R. Moehringer as his ghostwriter.

Mr Moehringer’s agent refused to comment on the speculation.

Harry, who remains sixth-in-line to the throne despite no longer being a working royal, said he wants people to read about “the man I have become”.

In a statement, the Queen’s grandson said: “I’ve worn many hats over the years, both literally and figuratively, and my hope is that in telling my story —the highs and lows, the mistakes, the lessons learned — I can help show that no matter where we come from, we have more in common than we think.

“I’m deeply grateful for the opportunity to share what I’ve learned over the course of my life so far and excited for people to read a first-hand account of my life that’s accurate and wholly truthful.”

The palace will be braced for the release of the book and likely prepared to respond to more allegations.

After Harry made his announcement last week, a senior source in the royal household told the Evening Standard there was “growing disquiet” about his literary project.

Harry and Meghan pictured at their final engagement (Image: GETTY)

Since quitting the Firm and moving across the Atlantic to start a new life, Harry and Meghan have set down deep roots.

They splashed out £11million last summer for a mansion in the Santa Barbara neighbourhood of Montecito.

And in June Meghan gave birth to the couple’s second child, a daughter named Lilibet, who was the first of the Queen’s 11 grandchildren to be born outside the UK.

Next month Meghan, who is on maternity leave, will celebrate her 40th birthday.