Despite occasional nods to the global pandemic, Soapland has remained a Covid-free zone. Hospitals have an abundance of beds, it’s always possible to see a doctor, and you’re more likely to die in a freak accident than from coronavirus.

Corrie’s Johnny drowned in a sewer, which was unlucky, given how well he’d dealt with his MS. Natasha was in the wrong place at the wrong time and if she hadn’t been dressed as Morticia, Harvey wouldn’t have mistaken her for Leanne, who was in the same outfit.

Now that’s a death that took an awful lot of ducks lining up to make it work. Quackers plot.

So why, when death is currently so prevalent in real life, is Soapland giving us the icing on the mortuary cake? In EastEnders, Kim’s been obsessing over Vincent’s death, and they’re dropping like flies in Emmerdale with serial killer Meena on the loose.

Maybe the shows are hoping to bag Most Spectacular Scene at the British Soap Awards. If so, it’ll be a close call between Emmerdale’s fire and Corrie’s sinkhole debacle. At least the latter’s death count is keeping Tracy in business at Preston’s Petals.

CORONATION STREET: RUN WHILE YOU CAN! 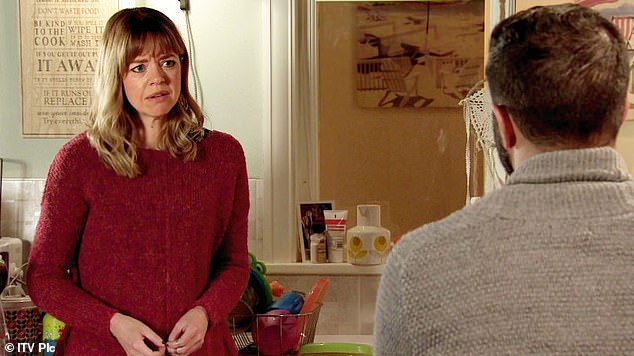 The big question with Toyah and Imran is not why he cheated but why he didn’t do it sooner. It’s hard to know which was worse: her pathological obsession with taking him to lunch when he insisted on working, or her need to fill their flat with waifs and strays.

When Kelly is released, it looks as though the pair might have to choose between her and Elsie. Toyah tells Imran (both pictured) she’s prepared to give him a second chance and you can almost hear his heart sink; well, more go crashing to the floor, really.

With Natasha’s funeral over, locals gather in the Bistro, where Nick has difficulty reading Sam’s eulogy to his mother. Maybe this will (finally) be the moment he hits one of the bottles that, yes, are still sitting on the kitchen unit in the flat.

Will he or Leanne ever get their act together sufficiently to put the champagne in the fridge? It’s now seriously bugging me.

Summer gets the wrong end of the stick when she overhears Adam and Daniel talking about Daisy and presumes the conversation is about her. How will Daniel’s theatre date with Daisy go? About as much fun as Les Misérables would be my guess. 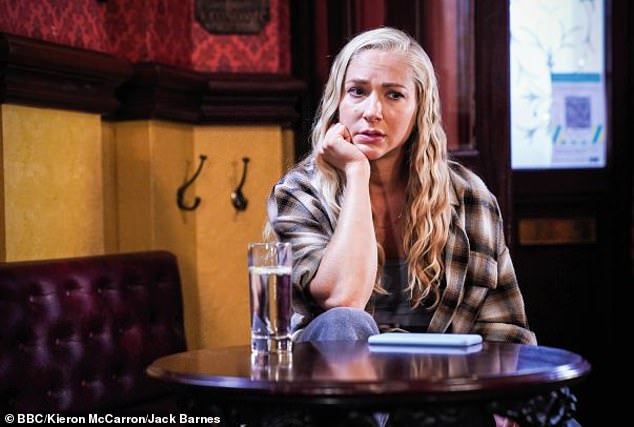 You have to wonder why Nancy is hanging around when it’s causing her so much distress. She’s been run over by Frankie, gone through a divorce, and is now incessantly fighting for the affections of her dad.

Add to that her seeming inability to find a hairbrush, let alone a stylist (and she’s not going to get any recommendations from Karen, whose coiffure looks as if it has a daily run-in with a combine harvester), and Nancy should be sprinting for Walford East.

What can we expect from the Prince Albert’s planned gay icon night? Hopefully, something more classy than Liam’s idea of making money by becoming a naked butler to a hen party. Janine sees an even bigger opportunity – getting Liam to steal Tiffany’s guests’ cars.

From where, exactly? Have we ever seen a car park near the club? Hasn’t the show done enough storylines with cars, anyway? If in doubt, chuck another ‘dodgy motor’ plot into the mix.

Talking of dodgy, Aaron practically has ‘wide boy’ tattooed on his forehead; it’s hard to believe Tiffany would be attracted to him after Keegan (shoulda gone to Specsavers).

Dotty agrees and encourages Tiffany not to date Aaron, insisting Keegan is better, but Tiffany reckons she’s just jealous. Hmmm. Not sure about that. He’s not exactly Milk Tray Man; he’s not even the Milky Bar Kid. Still, when has any woman ever seen sense over a man in Walford? Look at Chelsea.

EMMERDALE: MY HEART WILL GO ON

No matter how unlucky Rodney is in love, his broken heart mends very quickly with not even a glimmer of an emotional cardiac arrest. With Diane gone, he wastes no time in announcing he’s back on the market.

Run for cover, ladies; he’s a man on a mission. The only question now is who his next victim… I mean, amour… is going to be. Rodney is running out of options.

There’s always a worry when a Dingle comes up with a plan, and it’s hard to be optimistic about Chas’s idea to kidnap Kim’s racehorse. Sick of Kim’s control over Paddy, expect saddles at dawn between the old nags.